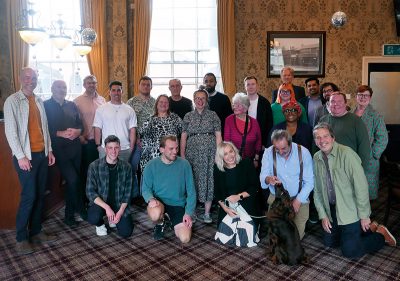 Participants from the visioning studies pose for a photo.

Working with over thirty volunteers across three working groups to develop the visioning studies, the process involved the identification of local issues, local assets, desired outcomes, and many solutions, resulting in a robust, aspirational, and deliverable vision. 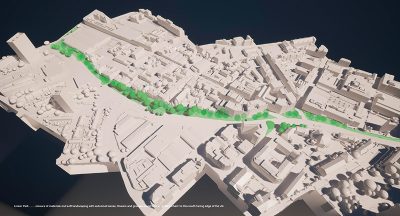 The areas, now given three distinct names, include: Chartists, the south-western border of the Jewellery Quarter that connects Paradise with Spring Hill; JQ Common, the traditional heart of the area which covers the Jewellery Quarter train station, Chamberlain Clock and The Golden Square; and Great Hampton Street, encompassing both Hockley Hill and Constitution Hill.
A common theme throughout the visioning studies is how greenery can be introduced to increase the number of outdoor spaces and develop a further sense of community. One proposal is to transform Hockley Circus into a connector between Handsworth, Soho, Hockley, Newtown, and the Jewellery Quarter by turning the flyover into the ‘Hanging Gardens of Hockley’. The vision would see the planting of community gardens and allotments, taking inspiration from The Sky Garden in Seoul and New York’s ‘The High Line’.

Another proposal sees the development of a Linear Park running along Summer Hill Road to help repair the ‘tear’ in urban fabric between the Jewellery Quarter and Ladywood.
A new network of trees and urban greening through narrowing the road would provide spaces for members of the public to spend time outdoors and encourage a new sense of community and create a safe and attractive green link to encourage people to travel by foot and bike from Winson Green and Spring Hill.

The Vyse Street Food Project, a proposal being developed by Slow Food Birmingham, BCC Food Trails and Urban Design Hub, aims to see the installation of a community garden over the underutilised brutalist car park behind JQ Modern, with ideas to introduce a circular and fully regenerative food system for the Jewellery Quarter.

The ambitious plans will now be used by the JQDT and wider community to engage and lobby local, regional, and national government. If the Jewellery Quarter Neighbourhood Plan is passed at local referendum, then additional funding could be made available to help deliver the visions. 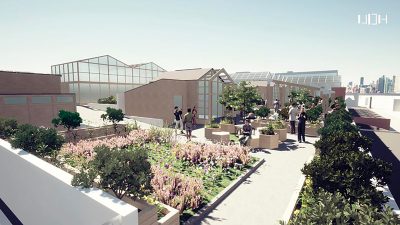 If the visions are implemented, it is hoped that they will fix some of the current challenges facing the Jewellery Quarter and will therefore unlock potential for businesses and residents to boost the local economy, increase investment, and provide a better-quality environment for local people.

Kirsty Hillyer, who runs local business Frilly Industries, comments on how the project has focused on both residents and businesses.

“Being a micro business based in the Jewellery Quarter since 2010 this is the first initiative that has actively consulted with a diverse range of stakeholders to shape the development of the area. It enabled us to challenge each other’s perceptions and empower us to present creative solutions that meet the needs of both businesses and residents as a priority.”

Local resident, Tina Francis also adds: “Looking at my environment differently has been the best part of being involved in this activity. It’s been interesting to learn what other people love about the place I call home.”

The visioning studies have been welcomed by Birmingham City Council and the GBSLEP, with received support from both. Anita Bhalla, GBSLEP Interim Chair, commented: “Publishing these vision documents is an important step along the way for the Jewellery Quarter to realise its full potential as a business cluster, visitor attraction and historical residential area. GBSLEP has been working alongside the JQDT for some time – along with partners across our region – following our funding of 9 Cultural Actions Zones over the last 18 months. Each is different, as they adapt to local needs. For JQ this CAZ has been about bringing local stakeholders together to develop a shared vision and practical action plan, which aligns with the Government’s levelling up agenda and is a toolkit to unlock future local funding and support.” 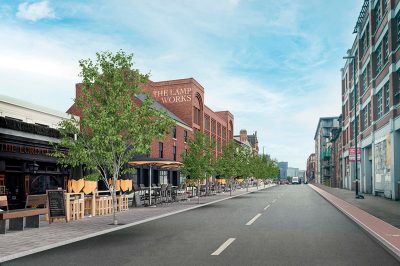 CGI showing how the narrowing of Great Hampton Street will benefit the community with outdoor seating and trees. Credit – Cordia Blackswan

Local development company, Cordia Blackswan, who contributed to the Great Hampton Street working group is already putting plans in motion. Marcus Hawley, Managing Director comments: “Cordia Blackswan is based in the Jewellery Quarter and our developments here seek to raise the bar in terms of community, quality, and amenity. We were excited to have the opportunity to participate in this visioning project and alongside the JQDT we have the aspiration and enthusiasm to help turn the vision into reality.”

Nicola Fleet Milne, who is Co-Chair of the Jewellery Quarter Neighbourhood Plan, comments on how the area’s Neighbourhood Plan continues to open new doors: “The JQ Plan was created to be an enabler for high-quality development in the Jewellery Quarter which puts the area’s businesses and residents first. As a community-led project itself it was also intended to spur on further work, and it’s thrilling to see the Plan open the door to another community-led initiative supported by GBSLEP’s grant.”

The visioning studies have been funded by the GBSLEP, with grant funding also being used to explore the development of a Jewellery Quarter creative incubator as well as enhancements to the visitor economy.

For more information, or to get involved in any of the projects, contact the JQDT at: