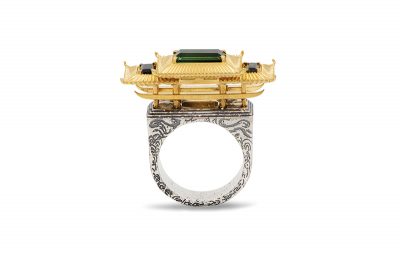 The British Academy of Jewellery had a jewellery showcase and sale in collaboration with iconic London-based jeweller Theo Fennell.

Rings designed and made by eight BAJ students were on display to the public at Theo Fennell’s premises in Chelsea Barracks, London from October 25 to 31. The rings were made by students as part of BAJ’s collaborative ‘Circle of Life’ live project with Theo Fennell and chosen for the in-store showcase by Theo himself.

The winning ring by BAJ student Blaise Zuntner has already been bought by none other than that great supporter of young creative talent, Sir Elton John.

“At Theo Fennell we really enjoyed working with the students and staff at the BAJ on the Circle of Life ring project,” said Theo Fennell. “They all embraced the idea, which was for the students to take their concept and work it through from drawings to a finished piece with its own display and promotional material, an injection of reality. We were deeply impressed by all the entries, so much so that, apart from the winner, we decided to show eight of the finished pieces in our Gallery and put them in front of the public.”

The ‘Circle of Life’ project saw a group of the academy’s Jewellery Design and Manufacturing Diploma students explore storytelling through jewellery as they received personalised guidance from Theo Fennell. Blaise Zuntner was announced as the winner of the competition for his evocative and skilfully executed ring at a joint event with Theo Fennell in July.

Students Georgi Tanev and Stacey Price were also highly commended for their work. Along with the winner and runners up, rings by students Edward Haire, Anara Pearce, Inti Yeung, Mollie Horrox, and Duke Birt were also chosen by Theo Fennell to feature in the display this October.

“I found Theo Fennell’s project to be a stimulating challenge which allowed me to really explore creatively and throughout the process I learned to adapt and adjust certain techniques and improve my skills to ultimately achieve the design I envisioned,” said winning student Blaise Zuntner. “Being able to present my work to an individual of respected standing within the jewellery industry as Theo’s was already an honour, let alone to win, for which I feel grateful and accomplished.” 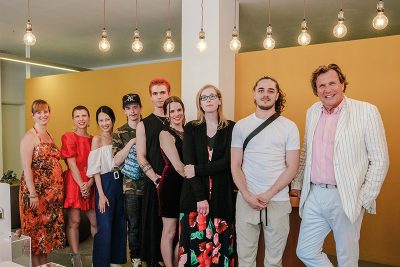 “Our live project with Theo Fennell and Level 4 students this year has been an outstanding success,” said Sally Collins, BAJ Interim Head of Academy- FE. “The students created such intricately designed and technically accomplished work, and engaged in such a valuable industry focused experience liaising directly with Theo and his team. BAJ are incredibly grateful to Theo, who has been so generous with his time, advice, and expertise. We’re very excited to see the finalist’s work on show at the Theo Fennell Studio at the end of the month and we watch with keen interest at how these talented young jewellers will flourish in the jewellery industry.”