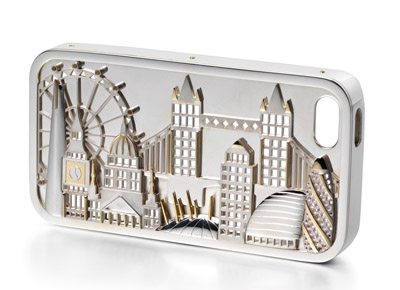 Two of the gold winners in 3D categories are indentured apprentices Ben Pritchard and James Handyside, Louis Warren designed a hidden USB pendant which formed the clasp of a necklace or bracelet, while Sian Hughes created and presented a medal design cast in bronze with a spinning globe at the centre inspired by Comet ISON, which burst into flames as it passed the sun in December 2013.

Ben Pritchard won gold for his beautifully crafted silver iPhone case of the London skyline and was also praised by Brian Hill: “Ben is an apprentice diamond mounter but this time he has channelled his efforts and skills into a piece of smallwork that has enabled him to broaden the scale and nature of his work and experience. To be noted at Gold level just three years into his apprenticeship is spectacular.” 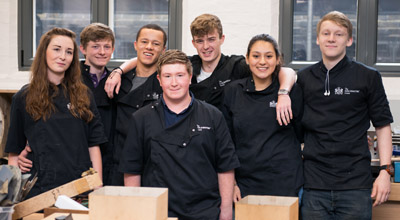 James Handyside, an engraver apprentice at RH Wilkins, was awarded gold in the Engravers section for a seal engraved Signet Ring (available on Flickr) showing the fight between a snake, an eagle and a lion.

The Centre also secured three commendation awards in the Specialist technique of Enamellers at Junior level. Abigail Buckingham, Ben Kerridge and Cameron Chandler were all recognised for their work.

Accepting the trophy, Centre Director Peter Taylor, said, “I was delighted to receive this award on behalf of the Trustees of the Goldsmiths’ Centre, our trainees and the whole team here. We set out to be the best that we possibly could be but none of us thought it possible that we might achieve so much in such a short period of time.

I am extremely proud of what the Centre stands for and that these awards recognise the excellence that sits at the heart of everything we do.” GCDC is a social not-for-profit enterprise governed independently of The Goldsmiths’ Company, which founded the council in 1908.