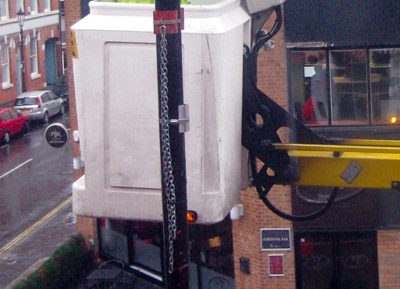 To: The Hockley Flyer

Firstly I’d like to tell you how much I enjoy reading your editorials in The Hockley Flyer; You do help me keep up to date with the goings on in the JQ.

I read with interest your latest comments on the chains that are still attached to the lamp posts in the area. I tried my best to ignore the noise for 12 months following the installation of the chains, which as you rightly say was for the Christmas lights in 2012. I thought they would be re-used each year you see, and that I’d be informed as such if I complained.

When I saw the new special Jewellery Quarter Christmas lights go up for Christmas 2013, I realised that this wasn’t to be the case, and the chains seemed surplus to requirements. I finally got my act together and wrote to the council to complain on 3rd February.

I asked if the chains could in the least be properly secured but ideally removed. The particular chain in question from my perspective, is right outside my bedroom window, and wakes me up several times a night when it is windy.

I wanted to let you know that the response so far has been laughable, with the council openly acknowledging that they don’t know which department to send the request to! It has been passed around two departments so far, each claiming it is not their area of responsibility. I don’t know if you have appealed to them directly, but if you have, have you had a better response than that?

I also wondered where you meant specifically, when you referred to the ‘quiet’ signs in the ‘Industrial Middle’?

I have lived in a hidden away sort of flat in the JQ for nearly 8 years now. I’m always being told for various reasons (for example, asking for recycling boxes), “you don’t live in a residential area.” Although my residential council tax is readily accepted! I think it’s the sort of place that people are hidden all over, although of course, I know you know the area a lot better than I.

Thank you for your time. I look forward to the next issue.

So glad you enjoy my editorials!

Although the Council denied it at the time, the Christmas lights with the chains were second-hand – they removed the ‘circles’ but left the chains on the lamp posts for some unknown reason, they obviously cannot use these lights again unless they are re-united ! If they weren’t so high up, I’m sure a ‘tat-man’ would have had them by now! I will have yet another go at getting them removed. Our local councillor,is aware of these particular lights, so an email may work. Shouldn’t be too difficult to locate her email address.

Regarding the ‘Quiet’ signs – The Jewellery Quarter under the Conservation & Management Plan provides protection to the traditional trade and the heritage of the area against unsympathetic developments and is divided into various areas, The Golden Triangle near to the Clock should have no (new) residential use and the surrounding area is the Industrial Middle where residential use is allowed under special circumstances, whereas the more outlying areas are allowed ‘mixed use’, although there are rules regarding Listed Buildings and the JQ is a Conservation Area.

Frederick Street is in the Industrial Middle and there are no residents so it seems a bit ‘daft’ to put a ‘Quiet’ sign up when there are at least four licensed restaurants located nearby! It’s just added junk.
Hope this helps
Marie