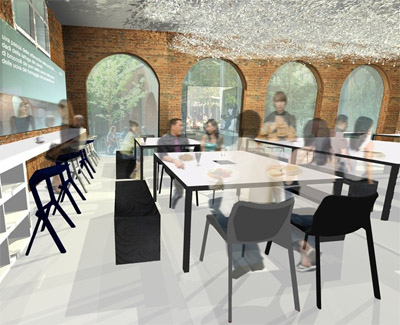 The Court of Assistants (Board) of The Goldsmiths’ Company recently unanimously approved the capital funding required to re-develop the Eagle Court site in Clerkenwell, London, as a centre for the craft and industry with a particular focus on educating the general public and providing training opportunities for young people who aspire to careers in silversmithing and jewellery-making.

This £17.5M project represents the Company’s largest ever direct investment in the craft and industry. Scheduled for completion in April 2011, the Goldsmiths’ Centre will house workshops, studios, exhibition and conference space and a café, as well as a much-needed training facility for young craftsmen and women. The training facility is to be known as the Goldsmiths’ Institute.

Responding to the decision the Prime Warden of the Goldsmiths’ Company, Mr Grant Macdonald said: “I am elated. The decision to build and run this centre of excellence has been achieved as a result of more than two and a half years of development work by an extremely talented and focused team. This is a wonderful opportunity for this historic Company to show that it remains committed to supporting and developing the craft of gold and silversmithing in the 21st century.”

Developed in partnership with the London Development Agency (LDA), which is providing the site for the new complex, the project will involve the restoration of the existing Grade 2 Listed Victorian School and the creation of a new five-storey building in which there will be workshops for established firms of silversmiths and subsidised workspace for young craftspeople starting up in business.

Designed by a team led by John Lyall Architects, the Centre will be environmentally friendly, making maximum use of sustainable sources of energy by means of a ground-source heat pump and photovoltaic cells on the roof.

The construction project and subsequent management of the Centre will be the responsibility of the Goldsmiths’ Centre Charity which has been established for the purpose.

Mr Martin Drury, Chairman of Trustees of the Centre, said: “We hope that silversmiths, jewellery-makers, retailers, curators, collectors and people who live or work in Smithfield and Clerkenwell will be as excited as we are by this latest venture in the long history of the Goldsmiths’ Company.

The old school will be restored and adapted to serve a contemporary purpose and John Lyall Architects have produced an ingenious design which links it by a glazed atrium to a handsome new building faced in sandstone and bronze. Our aim is that the Centre will not only support the crafts of silversmithing and jewellery-making, but also, with its café and exhibition spaces, give pleasure to those who live and work in this bustling, revitalised corner of London.”

The proposal to include high-quality managed workshop and studio space in Central London has already triggered a waiting list of individuals and businesses keen to contribute through their skills and knowledge to this new and exciting community.

Peter Taylor, Director Designate for the Centre adds: “The decision by the Goldsmiths’ Company to proceed with this development means that we, the project team, can begin to work in earnest at delivering the Centre and its future activities. We look forward to working with those in the craft and industry, and with our wider partners, to ensure that this initiative contributes full to preparing our trade for a challenging yet exciting future.”

The project was given the approval of the Court of Assistants on 15 April 2009.

(Later to be known as The Goldsmiths’ Centre – webmaster)