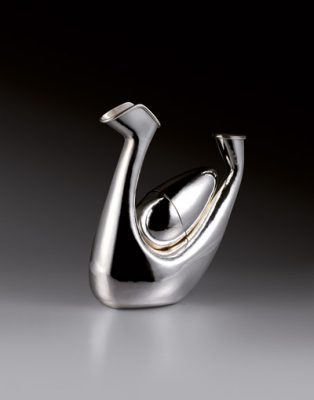 In a ceremony which took place on Tuesday November 3, 2009 at the Kelvingrove Art Gallery & Museum in Glasgow, the Prime Warden of the Goldsmiths’ Company, Mr Rupert Hambro presented Haruka Usui a fourth year student in the Silversmithing & Jewellery Department of Glasgow School of Art, with the winner’s certificate for the Young Designer Silversmith Award 2009 and a cheque for £500.

Haruka becomes the 15th winner of this annual prestigious competition organised by the Goldsmiths’ Company, which focuses on young silversmithing students at university in Britain today.

The Young Designer Silversmith Award scheme was started by Rosemary Ransome Wallis, Curator of the Collections at Goldsmiths’ Hall, in 1994, as an initiative to encourage students to show their artistic individuality in silver.

On presenting Haruka with her award the Prime Warden said: “The unique aspect of this award is that it provides a silversmithing student with the special experience of making a piece of silver in a leading workshop for a national museum collection, in this case the Kelvingrove Art Gallery & Museum.”

The brief for this year’s competition, which is open to any student under 30 in the United Kingdom on a BA or Master’s degree course, was to design ‘a carafe and two beakers.’

Haruka’s chose to interpret the brief in a charming visually playful manner. The carafe she designed is in the shape of bird and the beakers in the shape of eggs which are carried on the back of the bird form when not in use. Haruka calls her winning design ‘tori’ with 2 egg cups – ‘tori’ is Japanese for bird. 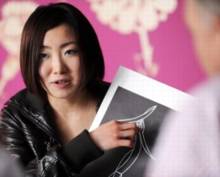 Rosemary Ransome Wallis said: “The judges were hugely taken with Haruka’s original interpretation of the brief. The duality of the piece being both functional and ornamental creates a sense of fun yet it retains its seriousness as a work of contemporary silver.”

The Prime Warden then presented Helen Marriott, Head of Silversmithing & Jewellery, Glasgow School of Art, with a commemorative silver plaque of the Goldsmiths’ Company’s coat of arms, designed and made by Keith Redfern and engraved by Stanley Reece.

The plaque is retained by Glasgow College of Art for a year. This is the seventh time Glasgow has been the custodian of this prestigious award as Haruka is the seventh student from Glasgow School of Art’s department of silversmithing and jewellery to win this award. Haruka’s fellow students Katherine Agnew won the third prize and Allyson Gee and David Finlay were each awarded a commendation.

Silversmith Howard Fenn, in whose Southwark workshop Haruka was able to turn her design into a silver reality, together with this year’s competition judges, Mr Martin Drury, past Director General of the National Trust and Mr Grant Macdonald, silversmith, both of them past Prime Wardens of the Goldsmiths’ Company, as well as Mr Rod Kelly, artist-silversmith, and Miss Annamarie Stapleton, consultant to the Fine Art Society London, were all present to witness Haruka winning her award.