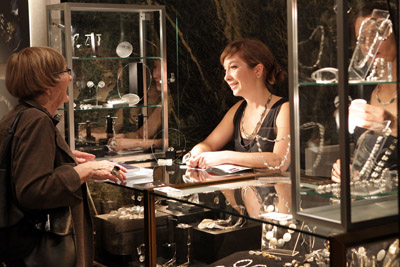 Goldsmiths’ Fair once again proved that the standard and variety of contemporary jewellery and silver in the UK remains at an all time high.

From Monday September 26 through to Sunday October 9, Goldsmiths’ Hall was occupied by 180 craftsmen from all over the country each one showing and an incredible range of innovative, dynamic designs executed with exemplary craftsmanship.

As in previous years the Fair was divided between two thirds of stands going to jewellers and a third to silversmiths, with 10 stands being allocated free of charge to selected recent graduates.

More than 11,000 visitors attended the Fair over the period to admire, buy, and place commissions. Despite the gloomy worldwide economic climate, spirits were not dampened and the interest in and support for the Fair and its exhibitors remains extremely buoyant. The unseasonably hot weather in Week One saw a decrease in visitor numbers with more people attending in Week Two even though it was one day shorter.

Despite this the total spend was higher in Week One and overall the total sales were up on those of 2010. 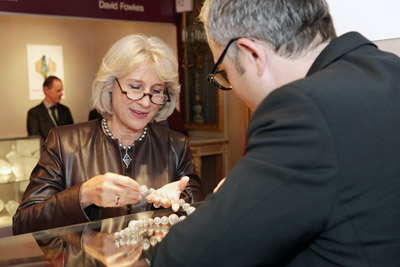 Buying patterns have undoubtedly changed reflecting the unsettled economy. In addition, the constantly fluctuating price of precious metals, mainly upwards, is having an effect on designer-makers.

That said the public, particularly those who come to the Fair, are well informed and completely understand that prices have to be adjusted to account for the basic cost of materials, quite aside from the hours spent making a piece, in addition to the craftsmanship and artistic talent involved.

Many silversmiths remarked that many of their sales tended to be smaller items with clients being less inclined to want to make an investment in the more expensive larger statement pieces.

In contrast quite a number of jewellers reported the opposite scenario and said that it was their more important items that were selling. Yellow and rose gold was much in evidence, and there was a considerable amount of stylish jewellery set with particularly stunning precious stones.

Here again the buying public is proving itself to be well educated and extremely interested in gemmology. One of the positive effects of the rise of precious metals, particularly gold, is that it is forcing designers to become more resourceful and creative in finding new ways of getting the ‘gold’ look but still keeping costs down.

For instance first time Fair exhibitor Melissa Rigby uses her own very individual technique of fusing fine coloured gold and silver leaf with vitreous enamel (ground glass) to produce a range of jewellery with fabulously textured surfaces. These not surprisingly proved extremely popular with clients and Melissa is now planning to refine and expand both her technique and range to include larger more ambitious pieces.

The Best New Design awards in both weeks coincidentally went to two recent graduates. In Week One it was jeweller Emmeline Hastings. Emmeline combines contrasting materials, including Perspex, wood, stainless steel, titanium, and precious metals, in a unique process to create striking and beautiful, wearable and non-wearable objects. Each one-off piece is highly tactile and incorporates an optical effect, which creates an illusion of movement and fluidity. 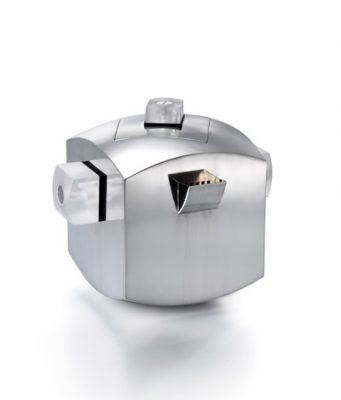 In Week Two, it was silversmith Charlotte Tollyfield who attracted the judge’s eyes. Charlotte was selected as the judge was “drawn to her beautifully executed, elegant, functional pieces and the fact that in the past few months she has developed her work, successfully experimenting with ambitious new ideas which combine an awareness of historical design with a 21st century aesthetic.”

One of the highlights of the Fair was an official visit by HRH the Duchess of Gloucester on Tuesday September 27. She was welcomed by the Prime Warden of the Company, Hector Miller and the Clerk, Dick Melly. Paul Dyson, Director of Promotion then guided her around the Fair and presented her to various exhibitors.

Among those the Duchess spoke to were recent graduates jewellers Milly Swire and Emmeline Hastings and silversmiths Jemma Daniels and Simon Pattison. Simon, who describes his silverware as simple and playful said the Duchess of Gloucester was very interested to learn how he had originally trained as a potter, then recently re-trained as a silversmith and was now combining his potter’s experience with traditional silversmithing skills.

Her Royal Highness also enjoyed a demonstration of hallmarking and the testing of metals using an X-ray fluorescence (XRF) spectrometer by members of the Goldsmiths’ Company Assay Office. A mini Assay Office has been set up in the centre of the Fair to help educate the public on the subject and importance of hallmarking and assaying.

Earlier this year a special celebratory Diamond Jubilee hallmark was introduced by the four UK Assay Offices and many of the Fair exhibitors said that they were either already using or planning to use it on their work.

For example, silversmith Louise Mary had a large pair of her distinctive candlesticks on her stand made using her unique fold forming technique, which proudly bore the new Jubilee Hallmark. She said that by incorporating the new mark made her feel she and her silver were taking part in history.

The importance of the Fair to exhibitors, both in terms of their business and personal development, cannot be underestimated. The Fair provides them with incredible exposure to clients, both regular Fair devotees and an ever-increasing number of new visitors. In addition, it gives them a remarkable platform from which to contemplate and re-evaluate their designs.

For example, jeweller Jacqueline Cullen remarked that the Fair presented her with an invaluable opportunity to conduct direct market research. This year she was able to gauge the reaction to her new work which incorporates black and cognac diamonds and was delighted that it received such an enthusiastic response.

Another important aspect of the Fair is the fact that it gives all the exhibitors a valuable opportunity to catch-up and exchange views with their fellow craftsmen. As silversmith Jonathan Boyd said, “It is a great experience to be surrounded by other makers. Perhaps that part of the Fair is underrated – as a solo studio jeweller you spend so long working on your own with insular thinking that the chance to network with makers is a fantastic opportunity.”

Exhibiting at the Fair for the first time can be quite daunting but all new exhibitors leave with a sense of achievement. Jeweller Christopher Anderson remarked: “The Fair was a tremendous confidence building experience which has also served to inspire new designs for the future.” This was endorsed by Julian Stephens: “The experience was very positive and I learnt a great deal.”

Emmeline Hastings one of the recipients of a free stand said: “I gained so much from meeting other makers and dealing with the public directly. It taught me valuable lessons in selling and displaying my work, as well as organising myself and my business.” Another recent graduate Frances Wadsworth Jones said: “Most importantly my time at the Fair helped me to understand the kind of person my customer is, so I have a better idea of how to go about finding them in the future.”

Looking ahead to the future – next year the Fair will celebrate its 30th anniversary! However before then many of the Fair exhibitors and other jewellers who feature on the Goldsmiths’ Company’s on-line directory Who’s Who in Gold and Silver will be taking part in another selling event – The Goldsmiths’ Company Pavilion at Somerset House from Wednesday June 13 to Sunday June 17 during London Jewellery Week 2012.