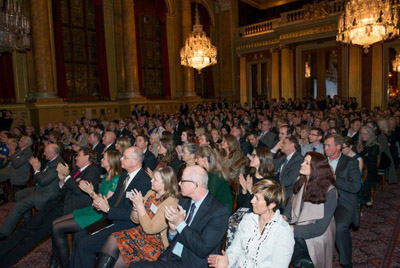 The Goldsmiths’ Craft & Design Council has concluded three weeks of successful judging for its 2017 Awards, with an illustrious line-up of industry experts helping to select this year’s winners.

Featuring over 100 judges, deliberations for the Goldsmiths’ Craft & Design Council Awards drew from the knowledge of celebrated designers, makers, retailers and experts across jewellery, silversmithing and the allied trades.

Among new judges involved in the 2017 Awards were Liz Olver, design director at Annoushka, Julia Clarke of award-wining retailer Hester Clarke, and notable winner from the 2016 Awards, designer John Moore.

British jeweller Shaun Leane was also handpicked to judge during the 2017 awards, setting the brief and judging this year’s Fashion Jewellery category, sponsored by QVC. In his brief, Leane asked entrants to design a piece of contemporary jewellery that ‘Explores and complements an unconventional area of the body with a contrast of materials to make the piece unique’. Speaking of his involvement, Shaun Leane said: “It was an honour to set the brief for one of the 2017 Goldsmiths’ Craft & Design Council Awards. It gave me an opportunity to reflect on how I approached my designs for Alexander McQueen and it was interesting to see how the new generation approach their own concepts with this brief. The results were outstanding.”

Liz Olver, design director at British fine jeweller Annoushka, also spoke about her positive experience judging this year’s entrants: “In my previous role as Senior Lecturer at Central Saint Martins I was immersed in a world of creativity, so judging the Awards was a much-anticipated delight for me. The Goldsmiths’ Awards support and encourage creativity so that it is both recognised, then nurtured and nourished.”

Over 550 pieces were entered into this year’s Awards, across a total of 24 categories and the Awards’ highly respected Premier, Major and Special Awards, which include the esteemed Jacques Cartier Memorial Awards, supported by Cartier.

Julie Clarke, managing director of retailer Hester Clarke, has been a supporter of the Goldsmiths’ Craft & Design Council Awards for over 25 years, witnessing the evolution of entrants and winning designs during that time. Speaking of her involvement as a judge this year, she said: “I think it’s vitally important to recognise excellence within our industry and I particularly like that the awards are not just given to the best of those entered, but only if the appropriate standard has actually been reached, thus ensuring only real quality is awarded. I was delighted be part of this process and enjoyed being able to handle and inspect the entries close up.”

Having scooped the coveted Goldsmiths’ Company Award in 2016, designer John Moore was welcomed to the judging panel for 2017, following a whirlwind year exhibiting his work at shows in both the UK and overseas. He said of his involvement: “As an entrant in previous years to the GCDC Awards I’ve always wanted to be a fly on the wall, so I was thrilled to be involved in judging this year’s competition. I have always held the GCDC Awards in the highest regard, and the positive impact it has had on my career has been invaluable. It’s vital for awards such as this to exist and inspire future generations of makers by visibly flying the creative flag. I am proud and hugely honoured to be part of this.”

This year’s winning designs will be revealed at a dazzling awards ceremony at Goldsmiths’ Hall on Monday February 27th, hosted by the Council and presented by jewellery expert Joanna Hardy. With more than 300 guests expected to attend, the Awards retains its position as the ‘Jewellery Oscars’ of the UK.
The Goldsmiths’ Craft & Design Council, which runs the competition, actively encourages crafts persons, designers, apprentices and students to enter their work in these highly respected annual awards.