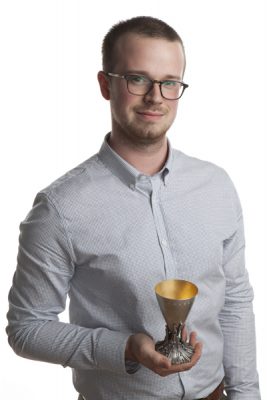 The exhibition provides a showcase for degree work by the best of the best art students drawn from universities and colleges throughout the country who have completed their studies and are entering the world of work.

Dobbie, who studied for a BA Hons degree in Jewellery Design and Silversmithing, won his award for the most Innovative use of Computer Aided Design (CAD) rapid prototyping and the use of cast pieces incorporating traditional finishing techniques.

He will receive a £1000 cash prize and the chance to undertake a week of work experience with Weston Beamor at its high-tech production facility in Birmingham.

The Award was judged by, amongst others, the jewellery designer Alex Monroe and Lindsey Straughton of the British Jewellers’ Association. Glen Day, Head of Business Development at WB, who headed the judging panel for the Award, said: “Our industry is only as good as the new talent coming into it and at WB we are keen to foster this in every way we can. Our New Designers’ Award is based on CAD as this is now central to both large and small scale jewellery production and is a key skill for those looking to make their way in our industry.

“Although CAD is much used in jewellery making, it is as yet relatively rare in silversmithing and we were very excited by how Hamish had used it to embellish his silver objects, particularly in respect of the hexagonal forms used in his series of spoons based on Fingal’s Cave.” 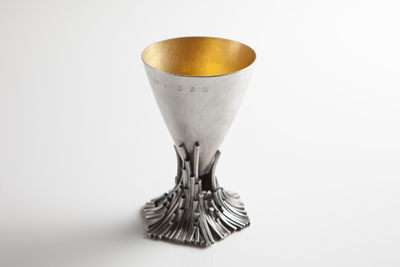 CAD is certainly something that Dobbie has mastered to great effect. “I’ve always been fascinated by technology and using computers came very naturally to me.

Some of the pieces I created for my degree show would have been impossible to create without computer aided technologies. I am particularly interested in 3D printing into wax and resins to create prototypes which can then be cast,” he said.

During the past year Dobbie (22) has enjoyed considerable success. He won a competition to create a goblet for Edinburgh’s Goldsmiths’ Hall and has also been the recipient of a bursary from The Worshipful Company of Goldsmiths and of a Silver Bullion Grant in recognition of his talents.

“I cannot imagine, now I have started, not living a life making things and my dream is to become a self-employed silversmith.

Now I have created a look and a style I can build on I would also like to try my hand at applying some of the CAD techniques I have learnt to other disciplines such as ceramics and homewares,” he commented.