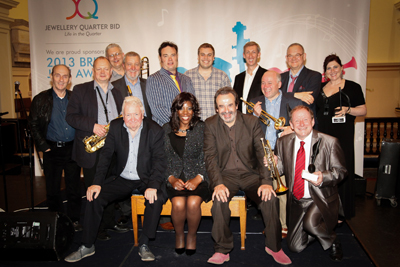 Music fans descended on Birmingham’s Jewellery Quarter on 10th July to honour the finest musicians on the UK jazz scene at the 2013 British Jazz Awards.

The prestigious event, known in the industry as the ‘jazz Oscars’, made its return to Birmingham 27 years after it started in the city. Held at St Paul’s Church, the event was delivered in partnership with the Jewellery Quarter BID and the Birmingham International Jazz & Blues Festival.

The hosts – Birmingham soul legend Jaki Graham and Jim Simpson, founder of the British Jazz Awards – presented semi quaver awards to 16 category winners and a special treble clef to the winner of the Services to Jazz category.

Luke Crane, Jewellery Quarter BID manager, said: “We are delighted to have played a role in bringing the British Jazz Awards back to Birmingham.

The evening provided us with an impressive celebration of British jazz and was a great success. The programme of jazz events attracted people from across the UK and has been a great boost to the Jewellery Quarter and the city.”

Jaki Graham, who also performed a track from her latest jazz-inspired album ‘For Sentimental Reasons’, said: “The Awards are a great way to celebrate jazz music and it was a real privilege to host the event and share the stage with such talented musicians.”

There were 17 awards on the evening including 11 instrumental categories, awards for Rising Star, Big Band, and Small Group; and industry awards to record companies for Best New Album and Best Reissue.

The awards were provided by WH Darby Ltd, based on Well Street in the Jewellery Quarter, while The Birmingham Assay Office, based on Newhall Street, engraved them with the winners’ names.

The Services to British Jazz award was presented to Chris Hodgkins. Chris has been the director of Jazz Services for over 21 years. The national organisation, which is funded by Arts Council England, provides services in information, touring, education, communications and publishing to the UK jazz community.

He said: “I’m delighted to win an award for something that I just love doing.”