Home » Travel » Have Your Say on Birmingham’s Segregated Cycle Routes 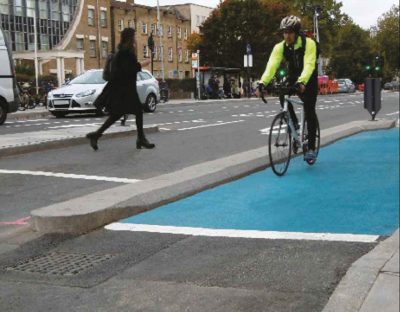 Birmingham City Council has launched public consultations seeking feedback on a range of proposed cycle routes across the city.
These routes will form part of a growing network throughout Birmingham, contributing to the council’s plans to make walking and cycling everyday choices for its residents, as part of a safe and integrated transport network that is working towards net zero carbon by 2030.

Four cycle routes are expected to be created or upgraded next year, following public feedback on the designs: Bradford Street; city centre to Small Heath Park through Bordesley Green (parallel to the A45); Jewellery Quarter to City Hospital (parallel to the A457); and Moseley to Cannon Hill Park.

Most of the cycle lanes will be separated from general traffic and pedestrians, providing a dedicated space which can be used by cyclists of all ages and abilities.

Lanes will be segregated with a combination of level differences. Where the lanes are not separated by a kerb but are at the same level, they could be separated either by installing kerbs or painting lines on the ground.

The Proposed Cycle Lanes JQ:
Following a review of all the pop-up cycle lanes, Birmingham City Council are now proposing to improve and make permanent the route from the city centre to City Hospital, through the Jewellery Quarter then parallel to the A457 Dudley Road.

There will be some changes to parking in the Jewellery Quarter Controlled Parking Zone, with a reduction of 30 permit holder bays on Carver Street, 18 permit holder bays on Legge Lane and 15 Pay & Display bays on Graham Street. Most of these reductions are already in place for the current pop-up cycle route.

Once the route crosses the A4540 Middleway ring road, the proposal is for a one-way cycle lane on each side of Hingeston Street, with space shared with pedestrians around bus stops. On the quieter Knightstone Avenue and Capstone Avenue, cyclists will share space with general traffic, then on Clissold Street, a two-way cycle lane provides separate facilities.

At Clissold Passage, an off-road two-way cycle lane will run alongside the pedestrian footpath. Here the route links with existing cycling facilities on the canal towpath, and with planned improvements on the A457 Dudley Road (more details at www.birmingham.gov.uk/dudleyrd).

All cycle lanes will be separated from general traffic and from pedestrians, using a combination of level differences (the lanes are higher or lower and there is a kerb in between), lane separator units (the lanes are at the same level and there is a rubber or concrete kerb between them) and lines marked on the ground (the lanes are at the same level).
This scheme will create approximately 1.2km of new segregated cycling facilities (about 0.8km of two-way facilities, 0.4km of one-way facilities on Graham Street and Legge Lane).
This project is funded by the Active Travel Fund and is part of the West Midlands Cycle & Walk programme
All Birmingham City Council consultations may be found on Council’s Birmingham Be Heard platform – www.BirminghamBeHeard.org.uk