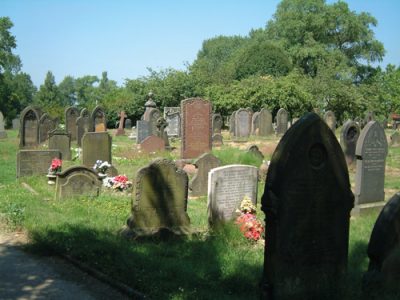 In July 2016 Hockley Flyer No 360 we reported that there were plans to restore Warstone Lane Cemetery and Key Hill Cemetery with the help of HLF funding.

Central to the scheme is a new ‘garden of memory and reflection’ on the spot where the St Michael and All Angels chapel stood before it was demolished in 1958 after being damaged by bombs in World War II and remedial work will be carried out to the catacombs and the railings cut down and removed for the war effort will be replaced.

The funding will not however include the cleaning and general maintenance of the cemeteries before, during, or on completion of the work nor the continuation of the wonderful research work that is still being undertaken by the Friends.

It is now September 2017 and the HLF funded work will be going out to tender towards the end of the year under the supervision of the Council (a Project Manager has been appointed).

The Hockley Flyer has offered some help to the Friends of Key Hill Cemetery & Warstone Lane Cemetery and Mark is their new IT Executive – he is constructing a brand-new website which will be up and running shortly.

With the thousands of residential units built already plus several thousands more in the pipeline, these cemeteries will be the ‘lungs’ of the area.

It has been suggested that as it has proved impossible to restore the Crimean Gardens at Summer Hill, a patch could be cleared and snowdrops planted (snowdrop bulbs were found growing in the blood-soaked battlefields of the Crimean War and introduced to the UK by returning soldiers) together with an interpretation board.

We feel sure that there must be some ‘frustrated gardeners’ living in the thousands of apartments who would love to feel some soil between their fingers and take part in cleaning up the cemeteries (under supervision of course).