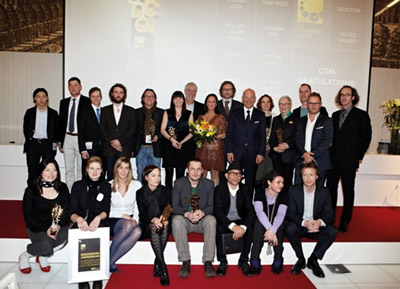 On Friday, February 25th, the first inhorgenta award for extraordinary innovations in the international jewellery and watch industry was presented at the international trade fair for jewellery, watches, design, gemstones and technology in Munich. Cash prizes for the competition totalled 17,500 Euro.

The inhorgenta award was the trade fair’s response to the wish for an award encompassing a wide range of categories – the first international award for the entire industry.

This was reflected in the attention the new award received: at this year’s premiere designers, brands and companies from all over the globe submitted no less than 332 entries.

“The national and international response is overwhelming,” said Klaus Dittrich, Chairman and CEO of Messe München GmbH, during his welcoming address at the award presentation.

They create a link between jewellery and interior decoration. An ‘honourable mention’ was presented to Silke Rehermann for her innovative brooches made of plastic.

‘Timepieces’ – Hubert Verstraaten won the award with his playful ‘Tamawa’ watches made of bakelite. The jury was impressed by the elegant style of the watches reminiscent of the fashion style dating back to the early 20th century.

‘Selection’ – Nicole Walger impressed the jury with allegorical wedding rings reflecting the topic of time.
‘Special’ – Martin Steinhorst awed the jury with his flying objects, considered by the jury as playful, original experimentation with the topic ‘Electro Trash’.

‘Tableware’ – Ja-kyung Shin received the award for her silver drinking cup. Featuring perfect craftsmanship it incites a philosophical discussion on ‘full’ and ‘empty’, according to the jury statement.

‘Technology’ – MüllerKälber GmbH won over the jury with its newly developed ‘Dimension Vitrine’, using LED technology to apply a variety of colours to jewellers’ display cases.

‘Lifetime Achievement’ – Dr. Ruth Reisert-Hafner was honoured for her lifetime achievement. The jury presented her with the inhorgenta award not only because Dr. Reisert-Hafner managed her family business during a period when this industry was still considered as man’s world. She also was an innovative jewellery industry pioneer who motivated generations of jewellery designers and artists to experiment.

Thanks to her, ancient technologies such as granulations were revived successfully. This award also honours the Ruth Reisert-Hafner Scholarship created by Dr. Reisert-Hafner, providing students with the opportunity to enrol at an international university of their choice. The inhorgenta award presentation was held during a formal evening event at the New Munich Trade Fair.