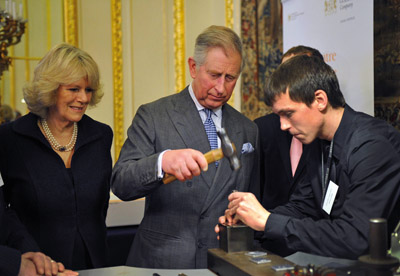 HRH The Prince of Wales accompanied by HRH The Duchess of Cornwall, visited Goldsmiths’ Hall on Wednesday 23 February 2011 to meet apprentices, young silversmiths and jewellers, as well as Members of the Goldsmiths’ Company.

Their Royal Highnesses were also shown the new Diamond Jubilee mark which is to be officially launched in July 2011 in celebration of HM The Queen’s Diamond Jubilee in 2012. This special commemorative hallmark, approved by the British Hallmarking Council, depicts a young Queen Elizabeth wearing an oversized crown in a diamond shaped surround. This optional mark will be available from all four UK Assay Offices in combination with a statutory hallmark from 1 July 2011.

His Royal Highness was then invited to strike the Leopard’s Head, the mark of the Goldsmiths’ Company Assay Office – the premier hallmark in the UK – onto a small sterling silver plate bearing a laser version of the Diamond Jubilee mark, in addition to the three other marks which comprise the hallmark. Robert Hinson assisted him by holding the silver plate steady while His Royal Highness, observed by The Duchess of Cornwall, struck the Leopard’s head mark with a hammer, in the manner of hand-marking used for centuries. The silver plate was then presented to The Prince of Wales as a souvenir of his visit to Goldsmiths’ Hall.

The Goldsmiths’ Company has for more than 700 years been responsible for hallmarking precious metal articles. In fact the word hallmark originates from the fifteenth century when London craftsmen were first required to bring their wares to Goldsmiths’ Hall for assaying and marking. Today more than 5 million precious metal items are hallmarked by the Assay Office each year and the Company is particularly proud of its historic role, which remains as relevant today as it ever has been, in safeguarding the interests of the consumer.

Dr Robert Organ, Deputy Warden and Head of the Goldsmiths’ Company Assay Office said: “The application of a hallmark is a skill that has been passed down through the centuries with apprentices learning their craft from their masters.   It is as important today as ever to ensure that the highest possible quality of marking is maintained.   We were delighted that the Prince chose to try his hand at hallmarking to appreciate for himself the high level of skills involved.  His Royal Highness hallmarked a silver plate bearing the image that will be used for the forthcoming Queen’s Diamond Jubilee Hallmark.  In effect, he has hallmarked the first piece of silver bearing this mark.”