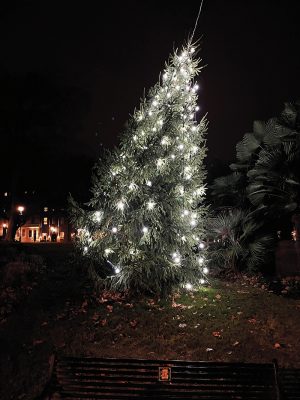 We have not reached Christmas week yet and this year’s St Paul’s Square Christmas Tree looks like it has already had “One over the eight.” Last year’s tree had the decency to get closer to Christmas before breaking out impressions of dodgy Italian architecture.

It does not get any better once the pale winter light staggers its blurry eyed way from the east. The tree’s impressions turns from ‘leaning tower’ to the ‘walk of shame’. Practiced by many a Brummie babe (or possibly Dave Hill of Slade fame, circa 1974), tottering home in high heels (which no self-respecting Acrophobic would be seen dead in), after sampling the delights of Birmingham’s famous hospitality.

If you work in retail during the Festive Season and suffer from an Xmas version of shell shock at the first bars of any perennial Christmas classic, you might want to put on your noise cancelling earplugs for the next section.
Oh, sod all this Bah Humbug. Dave should come over and bring Noddy Holder and the rest of the gang for a rousing chorus of ….

Breaking news: Storm Barra appears to have sobered up the tree and it is looking remarkably straight…. So much for the old story about an ill wind…