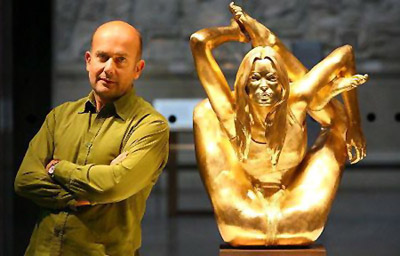 An 18 carat cast gold statue by sculptor Marc Quinn entitled ‘Siren’, of supermodel Kate Moss, has been given the mark of approval by the Goldsmiths’ Company as it bears the mark of the leopard’s head, the symbol of the Assay Office London where the piece was assayed and hallmarked.

The sculpture, which weighs 50 kilos and is 18ct gold, was made by goldsmiths Gareth Harris and Dennis Smith in their Hatton Garden workshop and took a year to produce.

It was cast in 40 separate pieces and in order to assemble them Gareth and Dennis had to perfect the technique of TIG welding to create a seamless finished piece.

Silversmith and Fourth Warden of the Goldsmiths’ Company Hector Miller provided a useful source of advice on the subject. The result was a tour-de-force of technical engineering and skill.

Kate Moss has been captured in gold doing a complicated yoga pose and the hallmarks which were applied by Andy Waker of Assay Office London using 1mm punches are to be found in the fold of the bikini bottoms that the supermodel is depicted wearing.

This extraordinary gold creation, which is claimed to be the largest gold statue made by man since ancient Egyptian times and is the largest gold item to bear the Assay Office London hallmark, is now on view at the British Museum in the centre of the Nereid Gallery, as part of the Statuephilia exhibition currently open to the public until 25 January 2009. www.britishmuseum.org.