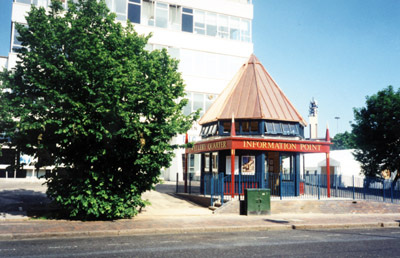 A move to Sutton Coldfield has provided a reprieve for the popular pavilion which previously housed the Jewellery Quarter Information Point and which has had to make way for the new Golden Square development.

Rather than being demolished the pavilion has been carefully dismantled in preparation for its move across the city.

With its distinctive copper roof the information point was opened in 1997 by Prince Charles and was the result of a competition among students from the Prince of Wales Institute of Architecture.

Although less than twenty years old the pavilion became a popular local landmark and was described in the Hockley Flyer as “a gem” and there was some obvious disappointment over its removal.

Unfortunately, despite its connections with Prince Charles its move to the Royal Town has not met with equal enthusiasm from either the Sutton Coldfield Town Centre BID or from local councillors.

The problem lies not with the structure itself but with its location and planned use.

Planning permission was given in August of this year for the kiosk to be relocated next to developer Corstone’s existing marquee on Upper Parade, an area that currently forms part of the only green space in the town centre. The use of the premises as another hot food take way has also been questioned.

It is certainly a shame that the pavilion will not continue to be used as a Tourist Information Point, something the town centre needs and would greatly benefit from.

Councillor David Pears told Sutton Coldfield Local: “I am not happy about the further loss of green space in the town centre which I believe will be a detriment to the character of the town. “I would rather see a greener town centre square with appropriate street furniture.”

Town Centre Manager, Mike Bushell, commented: “We raised objections to the move on the grounds that we don’t think the town centre can support another fast food operation of any sort.”

Mixed blessings then for the copper topped kiosk which is being preserved but in a rather ill-conceived, poorly thought out way.