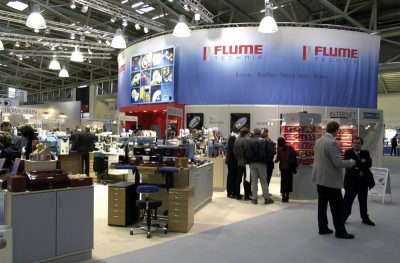 EU’s most important watch, clock and jewellery fair Inhorgenta Europe opens its doors for the 30th time between 21 and 24 February 2003 in Munich. Judging by the number of exhibitors registered so far for the fair, this will be a high-class platform for those involved in the watch, clock, jewellery, pearls, precious stones and technology sector in the EU. Over 1,300 exhibitors from 40 countries will be taking part.

And the management expects visitor numbers to match that of last year, at around 30,000 trade visitors. In 2002 jewellers, watch and clock makers and trade buyers came to Munich from 77 different countries. Inhorgenta Europe 2003 is expected to attract a similar audience.;

New trends, new brands, new technologies in the watch, clock and jewellery sector – all of this is to be presented at Inhorgenta Europe, one of the first big trade fairs of the year. Over 80,000 square metres of hall space are available for the exhibition. In addition there will be a range of new products and innovations on show at this international fair. For one, the fair has a new name.

Inhorgenta has become Inhorgenta Europe. The name change reflects the market significance and the development of one of the world’s most important jewellery and watch fairs located in the heart of Europe. Inhorgenta Europe is the central and at the same time the most important market place for watches, clocks, jewellery, precious stones, pearls and the associated technology within the EU.

With its venue in Munich, this fair is not only geographically in the centre of Europe, but in terms of content it unites a global range of gold, pearl and platinum jewellery, precious stones and watches.

From the global players to the young up-and-coming designers – this fair brings together professionals from all parts of the sector. Many jewellers and trade buyers make their way to Germany for the fair, to a country which is among the strongest markets for jewellery. Inhorgenta Europe also attracts significant numbers of trade visitors from the emerging economies of Central and Eastern Europe.

Another new innovation at the fair is the introduction of a special customer card for visitors to the fair. Launched at this year’s fair, the Inhorgenta GoldCard gives trade visitors access to the worldwide community of professionals in the watch, clock and jewellery sector.

The exhibition director for Inhorgenta Europe, Dieter Dohr, comments: “From December 2002, exhibitors and trade visitors can become a member of the GoldCard Community. Membership brings a range of added benefits and cash advantages. Also, the card is valid at a number of other fairs and shows for the watch, clock and jewellery sector as trade-visitor legitimation. This gives holders easy, fast access to those fairs.”

The exclusive Inhorgenta GoldCard, a high-quality chipcard, is made out individually in the name of the buyer, and costs 30 euros per year.

One of the highlights of the fair in 2003 will be the Design Podium in Hall C2. There Inhorgenta Europe will again be showcasing the world’s biggest range of creative designer and brand jewellery. All price classes are represented here, and design quality is extremely high.

The luxury brands in jewellery and watches are of course all strongly represented at Inhorgenta Europe, for example in the exclusive atmosphere of the Premiums Hall, the Platinum Forum and in Hall BO (Swatch Group). Taking advantage of the early dates of the fair for ordering new stock will be top jewellers from the classic European sales markets and increasingly also from the emerging economics in Central and Eastern Europe.

Another advantage enjoyed by this trade forum is the new single currency now valid in many countries targeted by this fair and the removal of certain customs barriers. Total price comparability, expanded sales opportunities and an easier transfer of goods at the fair itself are examples of these added benefits.

The trade audience participating in Inhorgenta Europe 2003 is particularly attracted by the very broad range of new technologies, machinery and equipment for manufacture and processing that is on show at the fair – along with all the latest display and packaging concepts for jewellery and watches. In these areas the fair is without doubt an important ideas forum and a catalyst for innovations.

The fair is also a platform used by many new entrants to the market to launch their careers or businesses. Inhorgenta Europe thus plays a leading role in promoting and encouraging young designers and professionals from the sector. Design Hall C2, for example, features this year for the first time a new international show called ‘Brand New – New Brand’, which presents the work of 20 newly qualified jewellery designers. This new show, now to be a regular feature of Inhorgenta Europe, gives new designers the chance to test their creations out on the trade public.

Goldsmith colleges and art colleges are also targeted more and more by the fair, and students actively encouraged to visit the fair. Groups of students will be coming to Inhorgenta Europe 2003 from Germany, Italy, Spain, England and Scotland. In this way the organisers of the fair are seeking to encourage new entrants to the sector and foster their interests.

Following the successful premiere of the first Luxury China from 19 to 22 September 2002 in Shanghai, attention is now turning to the next dates for this fair – from 25 to 28 September 2003. On the last day of Inhorgenta Europe – on 24 February 2003 – a China Forum will again be held targeted at manufacturers interested in exporting to China.

There are many good reasons for visiting Inhorgenta Europe. In addition to the wide range of goods and services for the trade showcased here – and not to be missed by serious professionals – there are also numerous seminars on topical themes and, of course, in the evenings participants in the fair can all enjoy the attractions of the city of Munich and its many restaurants, and facilities for the arts and for sports. In addition to its excellent infrastructure and its ultramodern exhibition centre, Munich offers exhibitors and visitors an excellent range of hotels and accommodation – it is in fact the city with the second-largest hotel capacity in Germany. Once again everything is in place for a high-quality, successful sector event.

Great Britain at Inhorgenta Europe
For many British market partners, this is the most important trade fair. Each year around 7.6 billion euros worth of jewellery, clocks and watches are sold in Great Britain. This makes the island the fifth-largest single market in this sector in the world, after the US, Japan, China and Italy. Around 500 British trade visitors came to Inhorgenta 2002, and for Inhorgenta Europe 2003 (21 to 24 February) Messe Munchen again expects attendance from Britain to be strong, not least because of the favourable exchange rate for British buyers.

Commenting on the jewellery market in the European Union, David Doyle, Chairman of the British Jewellers Association, BJA, sees a clear ranking: “Three countries dominate jewellery imports to Great Britain: In terms of economic significance, these are, in order: Italy, Germany and Spain.” This is one key reason for the strong interest from British dealers in Inhorgenta Europe, because from 21 to 24 February 2003 they will be able to meet, in Munich, the manufacturers and suppliers from these three key partner countries.

Not only British jewellers and watch retailers have discovered the benefits of Inhorgenta Europe, British designers and jewellery manufacturers are also firmly convinced. In 2002 and 2001 two British jewellery designers – Gill Galloway-Whitehead and Kathryn Marchbank – won the Inhorgenta Innovations Prize, a competition held each year by Inhorgenta Europe and judged by a high-calibre jury. The organisers of the trade fair are also expecting interesting presentations from three famous design schools from Britain which in 2003 will again be taking part in Inhorgenta Europe. These are: the Birmingham Institute of Art and Design, Birmingham, the London Guildhall University and the Central St. Martins College of Art and Design.

Another dozen or so British exhibitors have registered their attendance: Daniel Raphael, of Spectrum London, a specialist in platinum jewellery and attending Inhorgenta Europe for the first time as an exhibitor, has high hopes of Munich: “We have done many years of preparation in Great Britain. Now we want to expand into the western and eastern European markets and into Scandinavia. For us Inhorgenta Europe has highest priority in Europe, particularly in the area of jewellery.”

Wolfram Beyer, too, a young, ambitious jewellery designer from Sheffield, is hoping to raise the profile of his brand Freudema & Sodele: “We make expensive, modern jewellery out of plastics. It is a niche area, and so it is sensible to broaden our market.”

He believes Inhorgenta Europe is the ideal place to do this: “There is a lot more money around in the German market than in Britain. The Dutch dealers are also interesting because they are much more open to avantgarde jewellery – and we can reach both of these markets in Munich.”

Beyer is seeking to overcome the difficult situation in the market in Great Britain at the moment by expanding his business in Continental Europe: “At Inhorgenta Europe we hope to find customers with purchasing power, people that are ready to invest in high-quality jewellery made of synthetic materials.”

A similar view is expressed by George Lesniak of Buckley Jewellery Ltd.: “At Inhorgenta Europe we want to reach the European dealers. We can only do that to a limited extent in Great Britain, but in Munich it is much easier. For us there is no alternative to Inhorgenta Europe, at European level.”

Tom Wallace, Managing Director of Kalo Jewellery in Glasgow, Scotland sees the keen interest from British trade visitors as a logical consequence of the wide range on exhibit at the fair: “At Inhorgenta you can find exciting designs from all over Europe. More and more, you come across designers there who dare to try something a bit different. We are particularly looking forward to the new developments in materials and use of colour.”
www.inhorgenta.com.