Home » Art & Lifestyle » In the Making 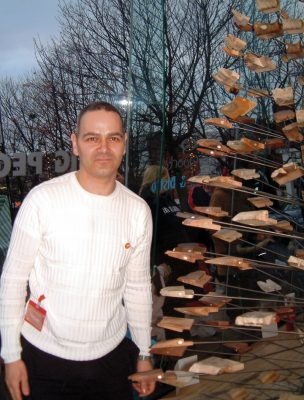 The oldest peg used in the sculpture dates back to 1906 and the newest was one used by a student last year. Every peg tells a different story and Stephen intends to add more pegs to the ‘tree’ as time goes by.

On December 6, the Rev. Tom Pyke told the story of St Nicholas to Brookfield Junior School Choir, who then sang carols for the children from the Old Fire Station Nursery, jewellers, and the general public – in and around the Big Peg.

Mulled wine and hot mince pies were served and the event was continued into the evening in the Quarter Cafe and local pub. Other events included a UCE Jewellery School fashion parade and performances by G Mall’s Dhol drum team and nine other artists, including Andy Wickett (formerly of Duran Duran). 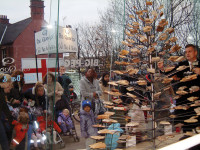 contact with G Mall and all the co-sponsors – Training Quarter, Cooksons PLC, Weston Beamor, The Assay Office, Slimbrand, JQ Regeneration Partnership and the commissioner of the project – The Big Peg.

The tree caused quite a sensation in the general media and at the moment stands proudly in the foyer of The Big Peg.