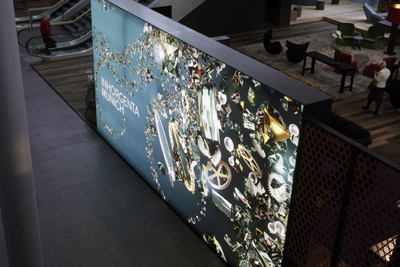 Inhorgenta Europe 2009, held from February 20th/23rd, 2009 at the New Munich Trade Fair Centre, once again validated its role as one of the globally leading trade fair for jewellery, watches, gemstones, pearls, and technology.

1,183 exhibitors from 47 countries (2008: 1,224/48) exhibited their latest trends and collections, new brands and technologies, as well as ground-breaking marketing concepts revolving around watches and jewellery on 64,500 square metres of exhibition space.

Despite the icy and snowy weather outside close to 30,000 trade visitors from 79 countries came to the New Munich Trade Fair Centre. With a ratio of 30% of international visitors inhorgenta europe once again proved its international character; however, due to the adverse weather as well as the current economic situation this year’s visitor numbers from Eastern European countries did not reach those of last year’s event.

Regardless of the rather muted expectations and forecasts prior to the event, manufacturers and retailers considered the trade show very positive. In the footsteps of rather prolific holiday business the level of ordering activities at the show was high. The industry’s decision makers are cautiously optimistic about the future development of business. The established companies among the exhibitors, in particular, were able to again post very good fiscal results.

The positive atmosphere at inhorgenta europe 2009 as well as the cautious market forecasts are also reflected in the poll by TNS Infratest: compared to last year only 33% (52%) of the exhibitors questioned rate the current economic situation for their industry as excellent to good; 56% (75%) gave this rating for future market development. Among the visitors, the poll statistics came to 45% (57%), or 62% (74%) respectively.

61% (72%) of the polled exhibitors rated the trade show overall as excellent to good; among the visitors the result was 91% (96%) for the same rating. The visitors liked the atmosphere of the show best (92%), followed by the complexity and range of the selection (90%), event transparency and segmentation (90%), as well as the quality of visitor information (89%). Exhibitors rated the atmosphere at the top (83%), followed by event transparency and segmentation (82%), and the multi-faceted side event and seminar programs (79%).

Manfred Wutzlhofer, Chairman & CEO Messe München GmbH: “The progression of this year’s inhorgenta europe shows that the jewellery and watch industry is starting the year 2009 by thinking constructively.

Consumers are falling back upon commodities of constant value and invest in valuable and enduring objects. Strong brands with a well-adjusted concept for retail and consumers have the upper hand. Retailers and manufacturers have rekindled a strengthening dialogue to ensure success for both sides despite the difficult conditions. This is where inhorgenta europe’s power as the interface between the two sides shows itself.”

The regular scheduled dates for inhorgenta europe 2010 from February 19th to 22nd , 2010 will be kept intact. Thanks to a now unobstructed trade fair calendar a move to January is no longer necessary.