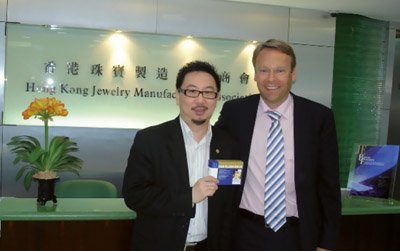 The plan calls for expansion of the Chinese exhibitors’ joint booth in Munich, in-depth information exchange about the respective markets, as well as a closer co-operation in the areas of marketing and PR.

Hong Kong and China provide some of the strongest exhibitor groups at inhorgenta europe in addition to Italy, Great Britain, Austria, and Spain.

Around 40 manufacturers, among them companies such as Techwell Creative, Double Arts Jewellery, or Legrand Jewellery, presented their products in Munich this year; many of them at the community booth for Hong Kong and China, organised by the HKJMA.

During two days of meetings in Hong Kong Wittmann not only met with representatives of a number of watch and jewelry associations, but also with journalists and close to 30 watch and jewellery manufacturers from Hong Kong and China. The focus was on the increased international character of inhorgenta Europe, as well as the development of Germany’s economy.

Watch sales on Europe’s largest market have steadily increased by two or three percent each year since 2006. Products from Asia dominate the mid-level to lower price range in particular. Thus Germany is one of China’s most important export markets in addition to Great Britain, France, and Italy. The strong Euro makes the German market even more attractive, lowering prices of many foreign-supplied products.

In the eyes of the trade show organization the Asia tour came to a thoroughly positive conclusion: “Our meetings showed that inhorgenta europe continues to have promising growth potential throughout Asia.” nhorgenta europe 2009 opens its doors on February 20th to the 23rd, 2009.