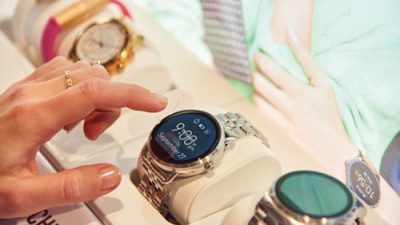 Smart watches are a future trend for the watch industry, © Messe München

For nearly 40 percent of British consumers, smart chronometers are already among the most important future trends in the watch industry. In terms of functionality, however, opinions vary considerably. Nearly every second person sees alarm devices in smart watches in a positive light, for example for helping older people feel more secure.

On the other hand, 44 percent are against making mobile payments by smart watch. These are the results of Messe Munich’s 2018 Inhorgenta trend index, which analysed a representative sample of 1,025 consumer responses in the United Kingdom.

“Digitalisation has become a force to reckon with in the watch industry,” said Stefanie Mändlein, exhibition director of Inhorgenta Munich. “Today, the industry is poised between traditional craftsmanship and high tech. More and more watchmakers are expanding their product portfolio to include smart timepieces. The increasing interconnectedness of the digital world will make many new functionalities possible.”

At present, 53 percent of consumers see smart watches in competition with smart phones. Market success in future may well depend on providing consumers with an added value that is directly connected with the high-tech device on their wrist. Currently, apps considered ‘standard’ for smart phones such as navigation aids (19 percent) and fitness trackers (14 percent) are only deemed important by a small percentage of consumers for smart watches. Additionally, 73 percent of consumers say that digital chronometers will never completely replace classical timepieces.

Traditional craftsmanship in demand in the digital era – In some areas, for instance, the traditional craft of watchmaking is still highly valued: 77 percent of British want to be able to take their watch to a clocksmith for repair. Over half of all consumers even consider this to be very important. Furthermore, 72 percent believe that a watch should reflect a sense of craftsmanship.

“In addition to these technical criteria, manufacturers can win over customers with individual designs”, said Ms. Mändlein. Consumers want their watch to match their personal activities such as events or sports (48 percent). “Design is important for the high-tech segment as well: Our survey shows that 46 percent of consumers recommend that watch manufacturers offer high-quality digital chronometers with a sophisticated design.”