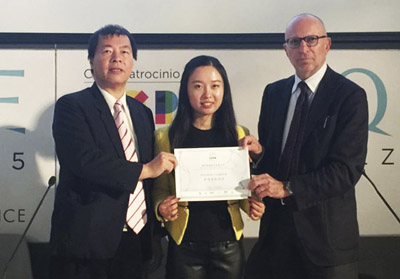 Liu’s designs have made a breakthrough in fusing together contemporary artistic jewellery with sculpture, and she has become well known as a “designer in the art of mending.”

Demonstrated by her creations and collections, Isabella’s design philosophy and ways of understanding craftsmanship and design are reflections of her personal experiences in believing fragilities and imperfections have potentials to become more beautiful, and interpretations of West cultures and East heritage.

She was honoured with bronze and silver medals at A’ Design Awards & Competition in Italy in 2013 and 2014 respectively. In 2014, she also won the first place of the finalists at Barcelona ENJOIA’T Award.

She was honoured with three gold and two silver awards at the prestigious Goldsmiths’ Craftsmanship & Design Awards 2015, which is regarded as the ‘Jewellery Oscar’. Her prestigious awards from the UK, Italy, Spain and China, indicate that her distinctive style of work promises to be recognised ever more widely across cultures, and most certainly throughout and beyond Europe and Asia. 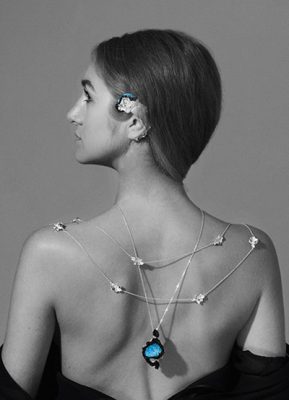 Scar is No More a Scar II’ Blue Collection

In July, her works were showcased at the BMW Henley Festival in UK, and were endorsed by Stewart Collins the festival’s creative director, Fiona Sanderson founder of the Luxury Channel, and John Smith the COO of Burberry, who is also the Chairman of the Henley Festival.

The AQUAE Venice committees highly appreciate her exhibiting new collection ‘Scar is No More a Scar II’, and ‘Spring Glamour’ (collaborate with Shenzhen Tai Fu Jewellery Co. Ltd), which can be described as being contemporary, conceptual, fashionable, and having an unique artistic connection with her own history.

It is reported that the organising committee at this year’s China-Italy Jewellery exhibition, the China Luxury Industry Association, The Hong Kong General Chamber of Jewellery, the Italian Jewellery Association, and many other organisations present at the exhibition were all promoting the level of Chinese jewellery design, the cultural brilliance of the tradition of Chinese jewellery, and independent creative skill, all to help develop the concept of “wisdom” in the Chinese context of design.

Liu has generously shared her exceptional thoughts in design with artists in the UK and China, and help to develop and cultivate artistic and design skills of young people in the country. She will also contribute to wider community in the arts field by presenting in or being an advocate of events that promote the exchange of cultures and arts between the British/European and Chinese societies.