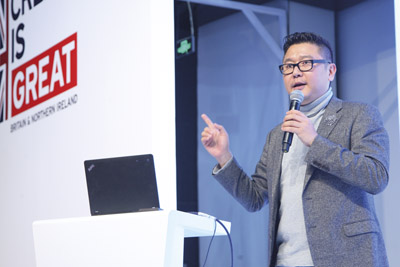 Fei Liu recently gave a speech as a special guest at the opening of the ‘Great Creator: UK Graduate Show 2015’ which was held at the British embassy in Beijing. The invitation was the confirmation of his successful work by the British and Chinese government and industry.

The ‘Great Creator: UK Graduate Show’ was organised by the British Council with a purpose to promote the British education and creative industry.

It showcased the UK’s far-reaching influence in the world of art and design and why the British higher education system is an inseparable component of the success of British creative industry.

The three-day event combined interactive and augmented-reality exhibitions from the UK’s top graduates with inspiring talks, workshops and master classes from some of the industry’s leading professionals.

As one of the special guests of the UK Graduate Show 2015, Fei Liu spoke about his successful career development and shared the insights of his work.

Together with Fei, the fashion designer Jimmy Choo was also invited to be the special guest at the opening of the UK Graduate Show 2015. He revealed the UK career path that helped him create one of the world’s most celebrated shoe brands.

Among the VIP guests who attended the opening of the event were: Jimmy Choo, Martyn Roper (Deputy Head of Mission at the British Embassy in Beijing), and Carma Elliot (Director of the British Council China).