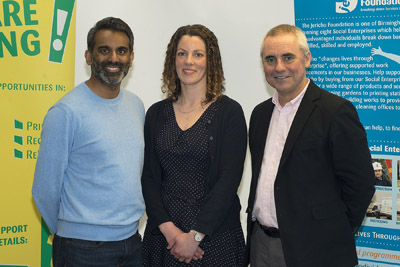 The Jericho Foundation is delighted to announce it has received £314,000 from the Big Lottery Fund, and a further £128,000 of matched funding from the Esmée Fairbairn Foundation, to support its ‘Labour for Change’ Project to benefit the victims of modern slavery.

These disadvantaged people became the focus of attention last year when Theresa May pledged £33m to fight human trafficking.

It is a huge problem in Britain today – it is estimated that in 2015 there were 13,000 people enslaved in the UK alone, while last year 3,266 individuals were rescued and referred to the National Referral Mechanism.

The ‘Labour for Change’ Project improves the economic, social and personal outcomes of the survivors of modern slavery and those at risk of this kind of exploitation. The project provides supported employment, apprenticeships and volunteering opportunities in Jericho’s eight social enterprise businesses. T

he Jericho Client Support Team delivers information, advice, guidance, personal development, language skills training and other services throughout the employment period or apprenticeship. Hope for Justice is one of the partners Jericho will be working closely with on this project and they will be sharing expertise while providing referrals and legal advocacy support.

Richard Beard, Chief Executive of Jericho, said: “Our ‘Labour for Change’ Project will truly transform the lives of victims of modern slavery. Our holistic programme ensures these survivors achieve a regular income, personal development and a feeling of safety and security.

The Jericho Foundation is a Birmingham-based registered charity which breaks down barriers in society and supports disadvantaged people to become fulfilled, skilled and employed. Jericho is the only organisation in the UK with the expertise and resources to deliver a complete programme of work experience, training and tailored support to the victims of modern slavery.

James Harcourt, Big Lottery Fund Deputy Director of Responsive Programmes, said: “It’s great to see so many projects like the Jericho Foundation’s ‘Labour for Change’ bringing a positive change to their communities. Thanks to National Lottery players, the funding announced today will support people to overcome barriers, learn new skills and improve their lives for the future.”