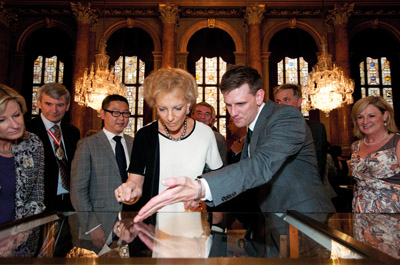 The UK Jewellery and Precious Metals Industry celebrated in style at a glittering event to launch the Commemorative Hallmark for the Queen’s Diamond Jubilee in 2012.

Key members of the industry, including retailers, designers and manufacturers gathered in Goldsmiths’ Hall at an event jointly hosted by the Goldsmiths’ Company and the four UK Assay Offices, London, Birmingham, Sheffield and Edinburgh.

The launch was attended by HRH Princess Michael of Kent who witnessed the first Jubilee marks being formally struck.

The creation of a celebratory Diamond Jubilee Hallmark follows a tradition established in the twentieth century when commemorative hallmarks recognised the Silver Jubilee of George and Mary in 1935, the Coronation of Queen Elizabeth II in 1953, her Silver Jubilee in 1977 and Golden Jubilee in 2002.

There was also a special mark for the Millennium, which proved extremely popular, being stamped on over five million pieces. Examples of pieces bearing these special marks, taken from the Assay Offices’ own private collections, were on display at Goldsmiths’ Hall.

The Diamond Jubilee mark is additional to the three compulsory hallmarks, the town mark, fineness mark and sponsor’s mark and will add provenance to items marked between now and 1st October 2012. It can be added to the hallmark on any precious metal; gold, silver, platinum or palladium. At the launch event expert hand markers from the Goldsmiths’ London Assay Office struck the commemorative mark onto a variety of items including pieces from all four UK Assay offices.

Alongside the traditional hand marking demonstration was an array of articles, which had already had the Diamond Jubilee mark applied by laser technology, an increasingly important technique used by the Assay Offices. Some of the incredibly delicate and intricate items on display would not withstand the impact of hand-marking. Laser technology offers an appropriate alternative for lightweight or hollow pieces and those where there is restricted space to apply a hallmark.

Displays at the Launch event showcased contemporary jewellery, traditional silverware with a modern twist and fabulous enamelled and silver pieces. These bore testament to the continuing skills, talents and expertise of UK designers, jewellers and silversmiths working throughout the country, with niche skills clustered particularly around Birmingham’s Jewellery Quarter and Hatton Garden.

Jewellery and Silverware items bearing the commemorative Diamond Jubilee Hallmark are expected to be in high demand over the next 18 months as the Diamond Jubilee celebrations and the London Olympics make 2012 a year to remember.