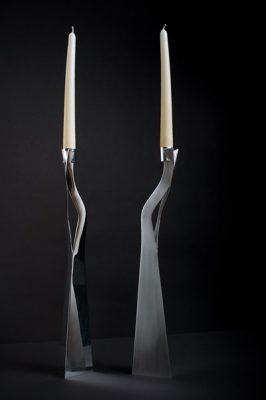 As well as presenting the two awards the Goldsmiths’ Company also sponsored the Jewellery and Precious Metalwork Zone at New Designers for the eighth consecutive year and had a stand in the centre of the zone offering students information on technology assistance and hallmarking requirements.

Peter Taylor, Director Technology and Training, said: “We are delighted with our continued association with New Designers.

It is a vital showcase for emerging British designers and the Goldsmiths’ Company strongly believes that without the continued encouragement and development of creative talent the future of the craft in the UK will be in jeopardy.”

The two Goldsmiths’ Company awards were granted for excellence – one for jewellery and one for silver. The criterion for both the awards is to identify excellence in design and craftsmanship. 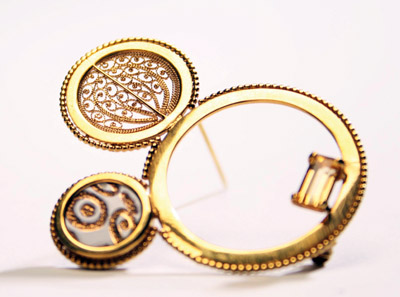 Silversmith Bryony Jackson, who studied metalwork and jewellery at Buckingham New University, was selected for the Goldsmiths’ Award for silver. Bryony’s passion is to translate traditional silver pieces into ones that are suitable for the modern household and appeal to a contemporary audience.

Her current collection is inspired by ceremonial silver of the City of London, which is both functional and decorative. Once she graduates Bryony will be looking for a workshop so that she can continue with her silversmithing.

She also hopes to be able to work with an experienced silversmith to widen her range of skills such as hand-raising. Mary Ann Simmons said: “Bryony’s candlesticks show a nice fluidity of movement and are designed to create a strong presence on the table.”

The Prime Warden of the Goldsmiths’ Company Mr Hector Miller presented Filipa and Bryony with a prize of £1,500, made up of a cheque of £1,000 plus precious metal to the value of £500.

As well as their cheques both Filipa and Bryony have automatically be given places on the Goldsmiths’ Company’s annual graduate business course Getting Started, which takes place in January each year. They will also be invited for a guided tour of the Assay Office London and an introduction to its services, plus a ten year registration of their sponsor’s mark at the Assay Office London, their first sponsor’s punch made free of charge and £200 worth of hallmarking services.

Getting Started, at Goldsmiths’ Hall 23 – 27 January 2012
The Goldsmiths’ Company annual graduate business course will once again take place at Goldsmiths’ Hall. This highly popular course, which is offered free to delegates, is designed to provide recent graduates of jewellery, silversmithing and allied trades, with an introduction to the industry and the career opportunities on offer. Whether the individuals are planning to work for a company or to establish themselves as a self-employed designer-maker, the course is equally relevant.

Recent graduates interested in a place on the Getting Course should either download the application form to be found on www.thegoldsmiths.co.uk/supportforthecraft/ or contact the Technology & Training Department on Tel: 020 7606 7010 or email: