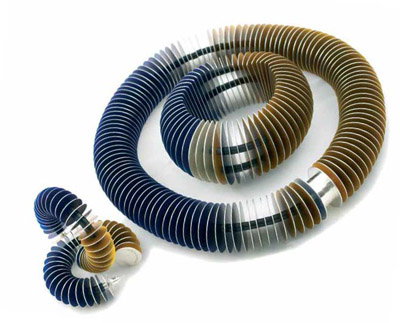 The designer jeweller John Moore has won the 2008 Kayman Award for his designs in mixed metals. Moore, who graduated from Manchester Metropolitan University in 2002, says his VANE collection – in brightly coloured aluminium and sterling silver – was inspired by repetition, rhythm and the relationship between individual pieces and the greater mass.

He also sites Venetian blinds and the way in which macaws’ feathers are coloured vivid blue on one side and bright yellow on the other (as are the anodised aluminium discs in his winning design) as influences on his work.

The many discs he uses are strung onto silicon rubber cord and separated by silicon tube. While Moore uses the industrial techniques of stamping and water-jet and laser cutting to create his component parts, the jewellery is finished and assembled by hand.

It is a collection of surprises. The cuff, thanks to its inner silicon band, does not need a catch and expands to roll straight over the wrist.

It is also reversible and can be worn to expose either the straight edges or the curved edges of the aluminium ‘slats’ to give two distinctive looks. The necklace too is easy to wear as the silver clasp is magnetic and needs no fastening, simply snapping shut.

The judging panel which included jewellery journalists, retailers and designers were unanimous in their praise for Moore. “These pieces provide an innovative and interesting use of mixed metals and are at the cutting-edge of jewellery design and production. The result is strong, flexible, vivid and eye-catching designs that are also hugely wearable,” they commented.

Moore is not the first member of his family to win the Kayman Award; his mother, the Leamington designer/retailer Jane Moore scooped the laurels in the 2005 for her distinctive engraved designs in sterling silver.

Speaking about his success, Moore said that he very much welcomes the changes to the hallmarking act and feels that its introduction will help consumers to appreciate jewellery for its intrinsic design qualities rather than simply its precious metal content.

“The silver content of VANE is very much its focal point and provides a perfect, precious foil for the vivid colours of the aluminium. This jewellery, because of the weight of the metal, to say nothing of the cost, simply could not be made totally in gold or silver.”

The runners-up: There are three other prize winners in this year’s event. Second place goes to designer Julie Spurgeon for her innovative, STIPA collection in 9ct gold and sterling silver. This five piece suite was praised by the judges for its attention to detail and highly wearable design.

Third place is taken by Neil Rayment for his men’s jewellery range entitled ‘True Man’ which makes innovative use of palladium and coloured gold to create a sophisticated range designed to match modern man’s spending ability and taste.

‘Five Carnival Cuffs’ from the Harlequin Collection by Atelier Gilmar of Monmouthshire are highly commended and were praised by the judges for offering silver and gold designs of real sophistication and shelf-appeal.

Speaking about this year’s winners, Anna Bladen, Senior Marketing Manager for Kayman sponsor Spring Fair Birmingham said: “We were once again delighted with the extremely strong response to the Kayman Award. Our stunning Designer Collections section, which is now backed by Retail Jeweller magazine, bears testament to Spring Fair’s total commitment to the furtherance of great jewellery design. We look forward to seeing these and many more exciting new designs in the Jewellery Halls at this year’s show.”

Lindsey Straughton of the BJA is also enthusiastic. “The changes to the Hallmarking Act, as these very different prize-winning collections demonstrate, have opened up a raft of new design possibilities to manufacturing jewellers and designers and I feel sure we will see many more exciting designs in mixed metals as the industry at large takes up the challenges it provides.”

Last year’s Kayman Award winner, the highly acclaimed ‘Fei Liu’ will be taking up his free stand in Hall 17 Stand A16 at this year’s Spring Fair where he will be showing new additions to his prize winning ‘Dawn’ collection in 18ct gold, pearls and coloured stones.

This was the last ever Kayman award.