Home » People » John Swain Retires after 9 years with the BJGF 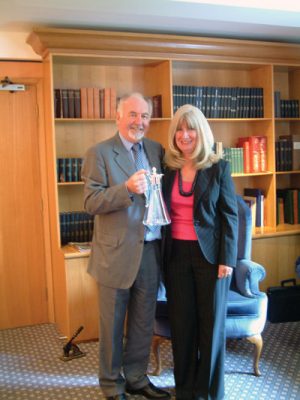 John Swain has announced his retirement from the British Jewellery, Giftware & Finishing Federation at their Annual General Meeting, following his nine years of service as a Board Director. Joining the Board in 1998, John was elected President in 2002.

He is also a past President of both the Metal Finishing Association and the British Stainless Steel Association. Popular with both Directors and staff at the Federation, John took on the role of ‘Director of Staff Liaison’ during his time with the Federation and has been involved with the Surface Engineering Association (SEA) for a substantial number of years.

Privately, John served an indentured apprenticeship as a structural engineer, John joined the Export Department of Girling Brakes, a subsidiary of the Joseph Lucas organisation.

Upon his return to the UK – after five years spent in Germany as a sales manager – he set up a subsidiary for a German company and became involved with stainless steel finishes. A successful MBO resulted in the formation of Anopol Ltd. during the eighties and John is currently the Managing Director of this company.

John has had numerous articles published on the subject of chemical and electrochemical treatments for stainless steels. He has appeared in national newspapers and on the radio, criticising the effect that UK legislation has had on metal finishing and manufacturing in general.

As a souvenir of his time with the BJGF and as thanks for his years of loyal service, John was presented with two beautiful Crystal Claret jugs. These jugs are of particular importance – they have the distinction of being made entirely from local materials.

Commissioned by the BJGF with one of the few remaining Birmingham manufacturers of silverware, the crystal was sourced from Stourbridge and the silver obtained from Cookson Precious Metals and hallmarked in Birmingham.

The jugs were then assembled and finished in Hockley by L J Millington. Even the presentation boxes have been manufactured in Hockley, making the gift a locally sourced product and something special to mark the end of John’s time with the BJGF.