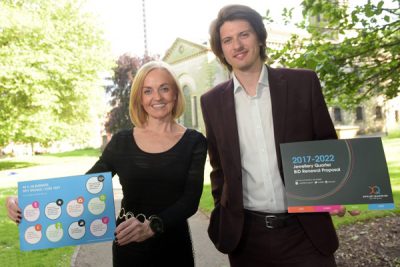 The Chair of the Jewellery Quarter Business Improvement District is to stand down after four years at the helm. Nicola Ridler, who has been BID Chair since 2016 is to stand down with Henrik Skouby, Director of electroplating company, E. C. Williams, replacing Nicola as successor.

The JQBID, which is now in its second term, is a defined geographic area within the Jewellery Quarter, in which companies pay an extra levy on their rates to fund additional services such as events and initiatives.

Nicola Ridler was appointed BID chair in 2016 and has been supporting a team of staff to help spearhead improvements to the Jewellery Quarter’s business environment and enhance the area as a place to live, work, visit and invest in.

As Chair of the BID, Nicola was instrumental in setting up many of the BID’s projects including the Jewellery Quarter Festival, the largest annual event delivered by the team. Nicola was hands-on from the very beginning using previous contacts to help source suppliers and being on-site every year to pitch in with the team to deliver a hugely successful event that has grown to welcome over 15,000 visits to the Quarter each year. “My proudest achievement is the team I’ve worked with and all the wonderful people who make it”. In her four years at the Business Improvement District, Nicola has seen the JQBID and JQDT project teams grow from a one-man-band to a busy hive, employing 11 staff.

Among the new members of staff that came into place during Nicola’s time are two employees that make up the Jewellery Quarter Clean Team which was formed in 2017. This dynamic duo ensures the streets of the Jewellery Quarter are kept clean and litter-free, including reporting fly-tipping and flyposting to the local authorities.

In February 2018, the Jewellery Quarter Development Trust, which Nicola is Deputy Chair of, launched the Jewellery Quarter Townscape Heritage (JQTH) project. Through funding from the National Lottery Heritage Fund, the JQTH is responsible for the protection and regeneration of the Jewellery Quarter’s industrial middle – supported by an activities programme (funded by the JQBID) to engage with businesses and members of the public. Nicola comments “The JQBID and wider JQDT teams are making huge differences to the future of the Jewellery Quarter and are being instrumental in recognising its past. It saddens me to leave such an incredible and talented group of people behind.

Nicola was diagnosed with stage 4 bowel cancer in August of 2017. After being given the horrific news of having a mere 6 months to live, Nicola has defied all odds and is now in year 3 of her diagnosis, having participated in both the Birmingham Half Marathon and Stoma 66 (66 days to reach 66,000 km). “What keeps me going is living by my motto of ‘get up, show up and never give up’. I’m a very positive person and I’m so grateful to have had the support of my friends, family, and lovely team.”