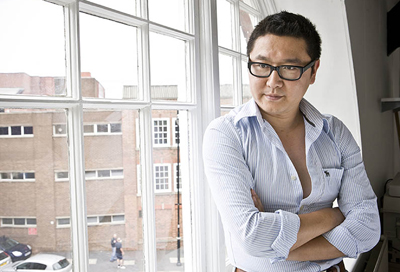 The winning collection was designed by Chinese born Fei Liu, whose young company F&L (UK) is based in Birmingham’s Jewellery Quarter. Liu has taken the delicate natural beauty of coral, as the inspiration for his winning ‘Dawn’ collection.

The result is highly textured, boldly adorned and colourful jewellery, perfect for dressing up and with real appeal to anyone seeking a more individualistic look. The collection which includes a choice of mix and match necklaces, pendants, rings, earrings and bracelets features a range of faceted gemstones including garnet, citrine, topaz and pink amethyst mixed with diamonds and pearls.

The judging panel, which included retailers, designers and jewellery journalists, was unanimous in its praise. In a statement issued after the judging they said: “These designs are intricate and beautiful and have a wonderful fluidity when being worn. This is real old style glamour brought bang up to date.”
Second prize went to Simon Pure of Guildford.

Designer Steve Parson’s took the sparkle of moving water as the inspiration for his ‘Waterfall’ collection, which uses blue sapphire and Tanzanian spinel to great effect. The judges liked the clean, strong lines of this deliberately understated collection and felt the jewellery would be the perfect accompaniment for any party dress.

Third in the competition was Erica Sharpe Fine Jewellery. The Birthday Boogie Woogie Collection, which was designed by Erica Sharpe, is extremely colourful and incorporates amethyst, morganite, aquamarine and iolite. The judges praised the versatility of this collection.

Two further companies were ‘Highly Commended’. The Cascade Collection from Janetti Design and the Retrospective Collection by Fameo Ltd were both praised by the judges for their excellent workmanship and interesting use of stones.

“We were delighted with the strong response to this competition and feel sure that buyers at Spring Fair will be very interested to see the imaginative and commercial ways in which the winning companies have interpreted the brief for the competition,” says the BJA’s Lindsey Straughton.

“Jewellery at Spring Fair now hosts some 800 suppliers across three dedicated halls, and is an essential event for hundreds of British designers and manufacturers. Our sponsorship of the Kayman Award underlines our commitment to supporting and publicising the very best of British design and manufacture across the show,” says Anna Bladen, marketing manager of Spring Fair Birmingham.

The five winning collections will be on display at Spring Fair Birmingham 4th – 8h February, 2007 on the BJA Stand A34 in Hall 17.