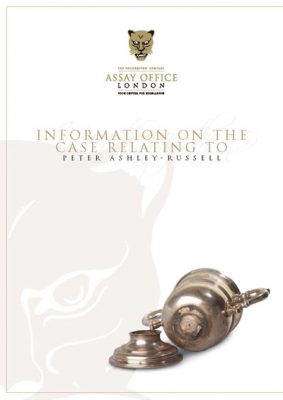 Experts from the Antique Plate Committee and Assay Office London, both run by The Worshipful Company of Goldsmiths based in the City of London, were instrumental in providing the evidence which led to the successful conclusion of one of the largest fakes and forgeries cases in recent years.

At the Snaresbrook Crown Court in London on Thursday 25 September 2008, Mr. Peter Ashley-Russell was sentenced to a total of three years imprisonment for offences under the Forgery Act 2006, four offences relating to the faking and forging of antique silver.

The presiding judge, HHJ King said: “Internationally, the British Hallmarking System is second to none and the ramifications of Mr. Russell’s attempt to undermine it are massive. It is a systematic attack on the precious metal and hallmarking industries.”

Mr. Ashley-Russell was responsible for the faking and forging of 39 antique spoons, forks, coffeepots and a tazza made of silver. The fraudulent activities included conversion of spoons to forks to increase their value and the application of fake hallmarks using imitation punches that Mr. Ashley-Russell had forged.

The total level of deception would have amassed to tens of thousands of pounds. Evidence against the fraud was provided by the Metropolitan Police and by experts from the Antique Plate Committee and Assay Office London, both run by The Worshipful Company of Goldsmiths.

Dr. Robert Organ, Deputy Warden of Assay Office London, said: “The prosecution of Mr. Ashley-Russell represents the culmination of a significant co-operation between the Goldsmiths’ Company and the Metropolitan Police.

It demonstrates the importance of hallmarking to protect both the consumer and the trade. It shows that those who flout the hallmarking regulations are in danger of significant penalties. Special thanks must be given to Detective Constable Tim Duffin of the Metropolitan Police’s Specialist Crime Operations team and Miss Christina Reti of Assay Office London who prepared the expert evidence for the case.”

The prolific number of fraudulent spoons produced and the high market value these items would have fetched on the open market makes the case one of the most significant involving hallmarking deception in the past century.

Prior to this, the most notable prosecution was the infamous Lyon and Twinam case, whereby Reuben Lyon and Charles Twinam were found guilty of forging silver in the 1890s. The Worshipful Company of Goldsmiths also played an active role in authenticating confiscated exhibits and providing expert evidence in this landmark trial.

There are several aspects of this case which represent significant changes in the way that the faking of antique silver is now attempted, the first of which is the high quality of the workmanship in the manufactured punches leading to particularly authentic looking hallmarks on the forged articles. Secondly, the detail of the false patination and engraving on each spoon was at a higher level of skill and competence than seen previously. Finally, extensive use was made of internet auction sites to distribute these articles.

The collection of seized goods, which includes the fake punches used and articles in the process of being forged, is a unique and invaluable educational resource. Discussions are taking place on how this can be used to educate the trade on identification of spurious antique silver plate.

The ingenuity of the faker was only matched by the extensive expertise which could be brought to bear by the Antique Plate Committee and Assay Office London. This included the combination of objective scientific measurement methods, connoisseurship and use of the extensive records retained by The Worshipful Company of Goldsmiths, dating from as far back as the 14th century. This combination of methods is unique in the industry and is demonstrated in the quantity and quality of evidence compiled against Mr. Peter Ashley-Russell.

This is not the first time Mr. Ashley-Russell has been brought to justice for fraudulent activities. He received a custodial sentence for similar activities when he appeared at Blackfriars Crown Court on the 16th May 1986.

Since its formation by Royal Charter in 1327, The Worshipful Company of Goldsmiths has played an integral part in the regulation of the precious metals trade. As the birthplace of hallmarking, it continues to be one of the world’s most authoritative bodies for authenticating hallmarked antique silver and gold, in addition to maintaining its core hallmarking business.

From administering the Antique Plate Committee, caring for the largest known collection of fake and forged antique silver, regularly providing educational seminars on the identification of fakes and forgeries, and new valuation services, the Company continues to build its reputation as the leading centre of expertise for authenticating precious metal articles.