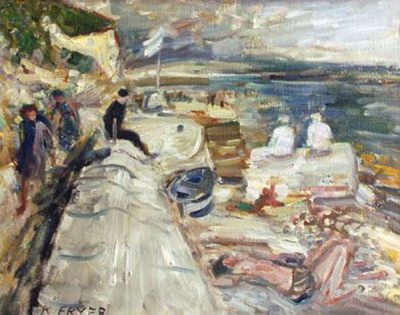 The ongoing rediscovery and resurgence of mid-20th century British women artists sees an important retrospective of the works of Katherine Fryer. ‘Kate’ was a traditional, figurative artist who worked in various media, but principally in printmaking and in oil painting of an impressionistic style.

Kate was born in Leeds in 1910. She attended Leeds College of Art from 1926 – 1931 undertaking a rigorous training in the traditional methods of drawing, painting and printmaking. She qualified in the midst of the depression when life was hard, and started out by working on her own, producing numerous wood engravings which were exhibited both locally and in London. Many engravings were also published.

In the late 1930’s Kate secured a teaching post at Bath Academy of Art run by Clifford and Rosemary Ellis. Living in Bath, she came to know many of the major figures in British art from the previous generation, such as Walter Sickert and Therese Lessore, as well as emerging figures, such as William Scott, Kenneth Armitage and John Piper. Life was exciting but Britain was plunged into war and Kate had to work through those tumultuous years. After losing her wood engraving tools in the Baedeker raids, she determined to concentrate on painting.

Painting was becoming a preferred medium. In 1948 Kate moved from Bath to spend a short time in Leicester before taking up another teaching post at Birmingham School of Art, working with Bernard Fleetwood Walker, head of the Painting School. Now she blossomed as a painter. Her travels to the west coast of Ireland in the 1950’s inspired many works during this period and she showed at the Royal Academy which purchased her oil painting The Road to Kilmurvey. So popular were the Irish paintings that virtually all were sold and pieces from this era are still much sought after.

At Birmingham School of Art she was noted for her serious, quiet but encouraging tuition. And she painted, painted all the time. The Irish scenes gave way to views of Birmingham and her native Yorkshire as well as scenes from her extensive travels through Scotland, France, Italy, Switzerland and the Netherlands. All manner of life was noted down in her ever present sketch book, favoured subjects including farmyards, the seaside and coastal views.
Kate was elected a member of the Royal Birmingham Society of Artists in 1956, later to become Professor of Painting and an honorary member.

She was always forward looking, never just relying on old ideas. After retiring from teaching she continued her practice of drawing wherever she went, exhibiting new paintings and even taking up wood engraving again later in life. Over 50 paintings, prints and drawings, along with ephemera tracing the history of Kate Fryer’s journey, can be seen this September at the RBSA Gallery, Birmingham. The exhibition will be accompanied by a full colour catalogue.