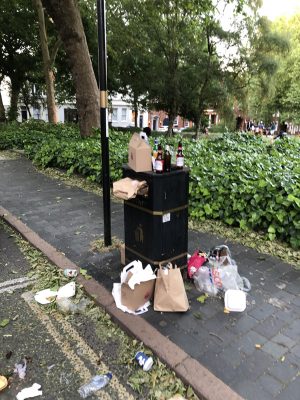 People visiting Birmingham’s parks are being urged to show their respect for the environment after 1,280 tonnes of litter was cleared from such settings in the first five months of 2020. For the same period in 2019, some 400 tonnes were removed.

Over recent weeks, the lockdown-inspired use of Birmingham’s parks and open spaces and the resulting surge in litter has meant that extra staff time equivalent to 10 workers per week is having to be assigned to keep open spaces as clean as possible – diverting the staff from their routine parks maintenance duties.

Cllr John O’Shea, Cabinet Member for Street Scene and Parks at Birmingham City Council, said: “Our parks staff do a fantastic job, but the pandemic is piling extra pressures on those working in our open spaces.

Our magnificent open spaces are one of Birmingham’s greatest assets and we want people to use them, but also to treat them with care and respect. The waste tonnages and the resource we are having to pour in are not sustainable in the long-term, but if people just tidy up after themselves, we can ensure our parks continue to be great places to visit.”

People flouting lockdown rules at Birmingham’s parks and open spaces are also being urged to show respect for their fellow residents, council workers, public health, and the environment after a string of recent anti-social behaviour and incidents.

In recent weeks, as well as the litter surge, there have been episodes including: A series of ‘rave’ style mass gatherings, with no evidence of social distancing; attacks on parks staff trying to close car parks in evenings; and drug use.

Cllr O’Shea added: “The overwhelming majority of people are working with us in the ongoing battle against coronavirus and we are grateful for that. We have kept our parks open throughout lockdown because we know that they are vital to the health and well-being of so many people across our city, but we do have a small number of people abusing our open spaces.

Given that tens of thousands of people have died nationally as a result of COVID-19, it is saddening to see people turn up to unauthorised and unofficial events at some parks – in some cases travelling from outside the city to do so. This risks everything we have done collectively in three months to tackle the pandemic. I understand that get people have lockdown fatigue, pubs and clubs have been shut and the weather has been magnificent, but we have to follow the guidance to protect our friends, family and loved ones.”

Visitor numbers have more than doubled at some parks since the lockdown began and the council has been working closely with West Midlands Police to monitor and tackle the issues that have been arising.

Cllr O’Shea said: “The fact some people are verbally and physically abusing our workers as they attempt to close parks in the evening is a disgrace. Last week beer bottles were thrown at one employee, but that is sadly just the tip of the iceberg. Parks staff have been working all throughout the lockdown to keep sites clean and accessible. They are part of the band of frontline key workers to whom we all owe a huge debt of gratitude.

“The environmental damage to our open spaces and the impact on those that live near such settings cannot be under-estimated either. Anti-social behaviour has far-reaching implications. Put simply, there are no excuses for acts like this. My message is stop, think about how you use our parks and please keep doing your bit to tackle coronavirus.”