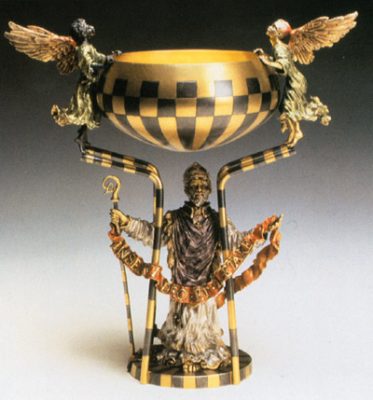 In the summer of 2008 the Goldsmiths’ Company will hold a major exhibition of English Church silver, under the patronage of the Archbishop of Canterbury.

Steeped in history the exhibition will vividly evoke the tradition, symbolism, and unbroken ritual of the Church of England through the ages.

The exhibition will open at Goldsmiths’ Hall on Friday May 30 until Saturday July 12 and admission is free.

This will be the first such exhibition on a national scale for more than half a century. Approximately 400 works dating from the pre-medieval period to the present day will form a breathtaking array displayed over two floors at Goldsmiths’ Hall.

The exhibition will be designed to assume an appropriately ecclesiastical atmosphere to complement the gravitas of the subject matter.

One of the important themes of the exhibition is the role of the church as preserver of objects that would otherwise almost certainly have ended up in the melting pot during the Civil War or at any other time simply through changes in fashion.

Among the earliest exhibits are Archbishop Walter’s silver gilt chalice from Canterbury Cathedral dating from 1160 and believed to have been taken from his tomb, as well as a late 10th century silver pocket sundial also from Canterbury and three 11th Century Bishops’ rings from Durham.

At the other end of the time spectrum commissions dating from as recently as 2007 demonstrate how the Church today remains a major patron of the silversmith’s art and how contemporary silversmiths continue to contribute to this important tradition.

Lenders to the exhibition include many of the country’s grandest cathedrals, among them Canterbury, York and Lichfield, along with Oxford and Cambridge college chapels and St George’s Chapel Windsor.

The majority of exhibits, however, come from parish churches up and down the country in whose possession an extraordinary number of medieval and later treasures remain. Surprisingly, several pre-Reformation chalices and patens are still in regular use.

Many of the items on display have until now only been seen by a restricted audience which makes the bringing together of this outstanding group of church silver for the benefit of a larger public of huge importance. In addition all the exhibits will be viewable at close proximity as opposed to from the elevated distance of the altar table.

Everyone who is interested in the rich history of the Church of England, and its enduring traditions and rituals will find this a fascinating and absorbing exhibition.

A specially prepared book written by leading historians and silver specialists and edited by the exhibition curator will be published to coincide with the exhibition.