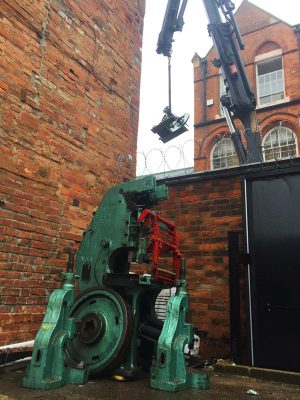 Deakin and Francis have always believed that tradition is the way forward. Having first established in 1786, they are immensely proud of their heritage in employing tools and techniques which have been passed down from one generation to The next.

Now they have announced that ‘we have recently acquired 14 fly presses and a large stamping machine, all over 100 years old from a fellow Birmingham Jewellery manufacturer, who have recently ceased trading.’

This procurement is particularly exciting for Deakin and Francis as they are not only expanding the existing collection of traditional machinery but are also able to revive tools that were actually made in Birmingham for a Birmingham Jewellery Manufacturer.

Their commitment to preserving local antiquated devices to craft jewellery continues to evidence the authenticity of their brand.

The stamping machine is a particularly impressive device as it has the ability to automatically stamp 2,000 shapes into sheets of metal in the space of one hour.

Quite remarkable for a piece of machinery that’s over 100 years old! Contrarily, the fly presses are operated using human strength but still follow the same process of stamping into the metal sheets, which is the beginning of the process for crafting the famous cufflinks.

“We believe that these traditional methods are crucial when it comes to the craftsmanship of jewellery as it makes certain that our items will be of the highest quality.

Many jewellery manufacturers use the alternative method of casting, which is a much faster process but means that the melted metal can be prone to impurities as it solidifies into shape.

Our technique of beginning with a solid piece of metal, such as the sterling silver sheets, or the ingots of gold and stamping the metal into shape is more time consuming but ensures that the finished product is as pure as it can be.”

As it stands, the stamping machine is currently dismantled as this is the only way it could be craned into the workshop.

Over the coming months it will be reconstructed back together and to restore it to its former glory. The machine will not only look visually impressive alongside the existing faithful devices but will also improve the efficiency of the cufflink making process without compromising on quality.

Deakin and Francis are proud to be moving from strength to strength and to be expanding our collection of steadfast equipment. Watch this space to see the finished result of the restored stamping machine!