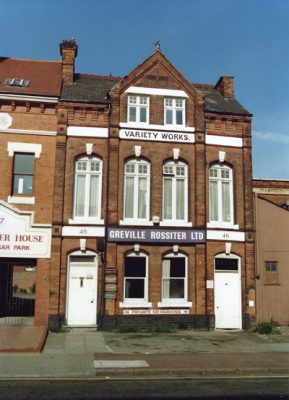 Variety Works back in the 1980’s (YBA Publications)

On 22nd October 2015 it was announced that three projects in The Jewellery Quarter will share more than £3.25million in grants from the Heritage Lottery Fund (HLF).

HLF has funded a number of projects in the Jewellery Quarter in the past, including the Newman Coffinworks restoration, the Pen Room and the new Birmingham Assay Office.

The restoration project will work with private owners and the city council to bring the buildings back into use for either commercial, office or residential purposes.

3/4 Houses – 6, Legge Lane:
A terrace of four 3/4 houses (workers’ houses built in 1800s were either back-to-back houses with front/back entrances or slightly larger 3/4 houses with side entrance accessed via an entry) – later modified for industrial use.

Built in 1866 for Henry Jenkins (die sinkers). These premises are now considered too dangerous to enter.

2. Jewellery Quarter Cemeteries – £1.38 million
Birmingham City Council will restore Key Hill Cemetery, created by Nonconformists in 1836, and nearby Warstone Lane Cemetery, laid out by Anglicans in 1848.

Covering some 7 hectares between them the two burial grounds made use of spectacular former quarry sites to create a dramatic series of catacombs in the redundant quarried faces.

The cemeteries have long since ceased to be used for burials but provide a haven for wildlife in the midst of the urban area. Grade II* Key Hill has many mature London plane trees and Grade II listed Warstone Lane has black poplars.

The project will include the restoration or replacement of railings and stone pillars, with new paths, gates and seating. The catacombs will also be made safe and restored. The community and local schools will be encouraged to get involved in researching the history of the cemeteries and helping to maintain them in the future.

Built in 1878-9 as a development of workshops and offices the building was, unusually, constructed using rolled-iron and cast iron beams as a structural frame. A later extension was purpose-built for jewellery manufacture with large glazed windows and floors designed to accommodate benches.

Part of the building (Argent College) has been completed and was officially opened on 23rd October 2015.

The Trust will now prepare a plan for a full grant of nearly £890,000 to restore the building and create a Heritage Gallery that would act as a visitor centre for the Jewellery Quarter plus a community workshop, a cafe and makers’ studios available to craftspeople.