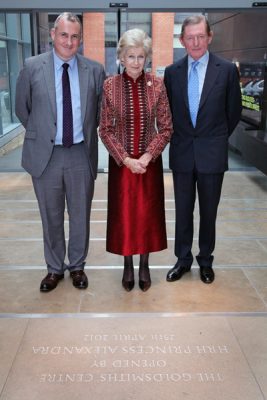 The new Goldsmiths’ Centre, a purpose-built development created by the Goldsmiths’ Company was officially opened yesterday (Wednesday April 25, 2012) by Her Royal Highness Princess Alexandra. The Goldsmiths’ Centre will serve as a hub for members of the jewellery, silversmithing and allied trades, as well as for the general public.

The Goldsmiths’ Centre represents the largest ever-single investment (circa £17.5 million) by the Goldsmiths’ Company in support of its craft and industry.

The Centre has been set up as a charitable enterprise and at its core is the aim to help young people to enter skilled employment through vocational training, in addition to nurturing an enduring community of like-minded individuals and businesses from the industry and associated trades.

Situated in London’s Clerkenwell, an area traditionally associated with the watchmaking and silversmithing trades, the new Goldsmiths’ facility incorporates an existing Victorian grade II listed structure, one of the first London Board Schools built in 1872, combined with an exciting new build element.

This redevelopment project was made possible through the partnership with the London Development Agency (LDA)*, which provided the brownfield site upon which the building stands.

On her arrival at the Goldsmiths’ Centre Her Royal Highness Princess Alexandra was received by Dr Charles Goodson-Wickes, Deputy Lieutenant of Greater London and Councillor Phil Kelly, The Mayor of Islington, who then introduced Mr Paul Double, The City Remembrancer, Mr Hector Miller (Prime Warden of the Goldsmiths’ Company), and Mr Martin Drury (Chairman of the Trustees, Goldsmiths’ Centre). 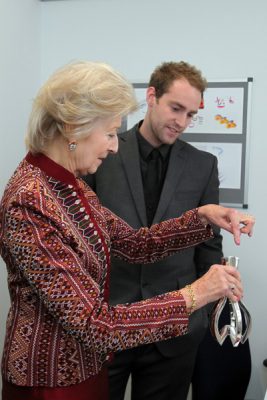 Established silversmith Clive Burr, who is based in one of the workshops, presented the Princess with a gift of a charming 18 carat gold brooch, designed and made by Clive Burr with enamelled detailing of Daphnes, the Princess’s favourite flower, by Jane Short.

Returning to the ground floor of the building, the Princess was presented to the Trustees of the Goldsmiths’ Centre including Dame Lynne Brindley, the Chairman designate of the Trustees. Moving into one of the Centre’s two impressive dedicated exhibition spaces**, Her Royal Highness met and talked to other assembled guests among them members of the Court of the Goldsmiths’ Company and individuals associated with the development and construction phases of the project.

Before Her Royal Highness was invited to unveil the commemorative stone, the Prime Warden of the Goldsmiths’ Company gave a short speech about the Centre in which he made reference to the enormous debt of gratitude owed to Dr Stuart Devlin, Postgraduate Programme Director, whose inspirational ideas for a graduate institute began the project in 2005.

The Chairman of the Board of Trustees Mr Martin Drury then thanked the Princess for her presence, and said: “Our intention is that the Centre will be a place of excellence, a place of learning and study where skills are passed on and where beautiful things are made and sent out into the world to be treasured. It is hoped that in time, the Goldsmiths’ Centre will take its place among the great institutions of London.”

After unveiling the commemorative stone, Her Royal Highness was presented with a posy by Lois Taylor (8) daughter of the Director of the Goldsmiths’ Centre, Mr Peter Taylor. She was then escorted to her car by Dr Charles Goodson-Wickes, Deputy Lieutenant of Greater London who bade her farewell. 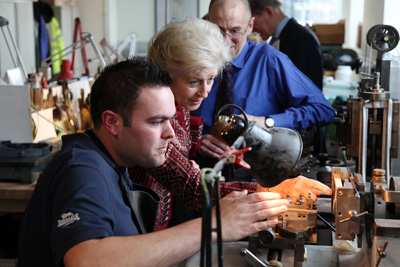 At the end of the Royal visit Peter Taylor, Director of the Goldsmiths’ Centre, said: ‘The official opening of the Centre represents the culmination of seven years of hard work put in by the project team, the Trustees and all the others who have contributed to this major initiative.

We are delighted that HRH Princess Alexandra honoured us with her presence and made this an extra special day for all concerned by formally opening the Goldsmiths’ Centre.”

*The London Development Agency (LDA) works to improve the quality of life for all Londoners and drive sustainable economic growth. www.lda.gov.uk.

** The Centre’s exhibition spaces, which are equipped to accommodate exhibitions, conferences, or seminars, represent an important element of the Charity’s fund raising capacity, and, in addition to programmes directly in support of the craft and industry, local businesses area also being encouraged to use the available facilities.