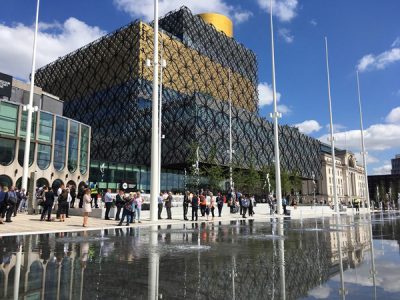 On 3rd July 2019 Centenary Square’s new look was officially unveiled nearly five years after Birmingham City Council launched a competition to redesign one of the city’s biggest squares, which attracted 185 entries from more than 30 countries.

Cllr Brigid Jones, Deputy Leader of Birmingham City Council, was joined by the Lord Mayor of Birmingham, Cllr Mohammed Azim, and the Lady Mayoress, Bushra Bi, to open the square by switching on the pool’s 28 water jets.

The project was launched with a competition in October 2014, after the new Library of Birmingham had opened, to help regenerate the square and the Westside area of the city.

Cllr Brigid Jones said: “This is the next important stage in the re-imagining of Centenary Square: it is no longer just a space to pass through – it is now a world-class public space where people can stop, relax and socialise and take in the incredible things around them.”

Regeneration works were majority-funded by the Greater Birmingham and Solihull Local Enterprise Partnership, who awarded a £10.55m Enterprise Zone grant, with additional funds secured through Section 106 planning infrastructure levy (£1.2m) and city council funding (£3.8m).
Tim Pile, Chair of the Greater Birmingham and Solihull Local Enterprise Partnership, said: “We’re very excited to witness the opening of this world class space, reinforcing Birmingham’s status as a global city. This high-quality public realm can be enjoyed by those living, working, and visiting the city, and is the perfect centrepiece for the surrounding landmark buildings and developments.

“It will provide a key focal point for the broad range of public and private sector investments currently taking place adjacent to Centenary Square at Paradise, Arena Central, Symphony Hall and West Midlands Metro, and hopefully help to attract even more.”

Graeme Massie, architect who won the design competition, said: “We are delighted with the completion of our competition-winning proposals for Centenary Square, and now look forward to seeing it evolve into a key gathering place for the people of Birmingham and visitors to the city.”
Today’s event coincided with the opening day of Music for Youth’s National Festival, which is held at various venues across Birmingham from 3 to 6 July, featuring young musicians from all over the UK – including pupils from Oasis Academy Woodview, in Edgbaston, who performed djembe and steel pan pieces during the opening ceremony.

Judith Webster, Chief Executive of Music for Youth, said: “The National Festival is a real highlight of Music for Youth’s annual music programme. This is our 15th year hosting it in Birmingham and we’re always delighted to see performances from local talent as well as those who’ve travelled in from across the UK. Music plays such an important role in young people’s lives – it allows them to express themselves creatively and can have a really positive impact on their mental health – that’s why we keep coming back to Birmingham to celebrate and support the next generation of musicians!”
Margaret Willis, CEO of Unity Bank Trust, which is sponsoring the outdoor stages taking place in Centenary Square and across Birmingham, added: “At Unity, our goal is to lend responsibly to firms and organisations that share our vision to help create a better society. By providing a platform for young musicians across the country to perform and develop, Music for Youth is making a real difference to young peoples’ lives while demonstrating that they share our values.”