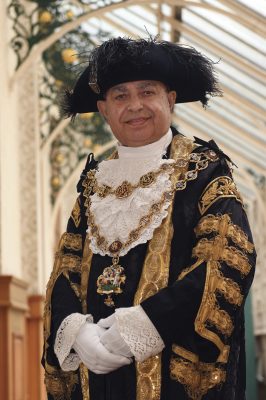 Birmingham’s new Lord Mayor, Cllr Muhammad Afzal, took up office after the Mayor Making ceremony at the Council House on 25 May 2021.
Cllr Afzal had been due to serve as Lord Mayor last year, however due to the first lockdown it was not possible to conduct the traditional mayor making ceremony, and Cllr Mohammed Azim’s term as Lord Mayor was extended as a result.

The Lord Mayor moved to Birmingham in 1969 and was first elected as a councillor for Aston in May 1982, which he has served for 23 years until March 2005, and in May 2007 he was re-elected as councillor, serving that ward for 37 years in total.

Prior to his appointment to the ceremonial role of the city’s First Citizen, Cllr Afzal held positions on various council committees, including as Chair of Personnel Committee and Chair of Urban Renewal Committee, and more recently on the Resources and the Sustainability and Transport Overview and Scrutiny Committees.

Lord Mayor of Birmingham, Cllr Muhammad Afzal, said: “By accepting this honour, I am enormously proud to be able to serve this great city as Lord Mayor. I will do my utmost to maintain Birmingham’s high profile and build on its successes, as we emerge out of lockdown and look towards the future, ensuring all Birmingham’s communities are served by their Lord Mayor. It will be a huge privilege to serve my adopted home city as First Citizen, and I look forward to representing Birmingham for the next 12 months.

“I also want to thank Deputy Lord Mayor Cllr Mohammed Azim for serving the city as Lord Mayor for a double term. I will be carrying on the work he has done in recognising the sterling efforts of our communities and volunteers across the city during the pandemic.”

During Cllr Afzal’s year as Lord Mayor, he will be supported by the Lady Mayoress, his wife, Tazeem Akhtar and his children.