Home » Appointments » New men at the Top of BJGF Federation 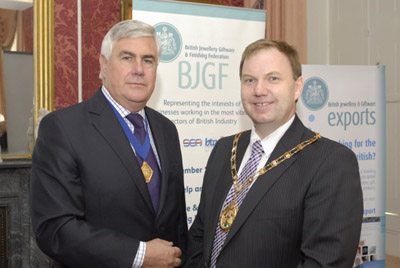 David Doyle of Jewellery Brokers was installed as incoming President of the BJGF Federation at the 122nd British Jewellery Giftware & Finishing Federation AGM at the spectacular 17th century ancestral house of the Earls of Bradford – Weston Park, Stafford.

He took up the reigns from outgoing President Linda Evans, who will become Deputy President for 2008/09 whilst David Metcalfe, formerly the Chairman and Managing Director of EmapTPS, became the new Vice President.

The British Jewellery, Giftware and Finishing Federation represents the interests of over 2500 member companies nationally working on behalf of those engaged in the manufacture and distribution of jewellery, giftware, accessories, and the surface engineering sector.

They employ an estimated 46,000 people with annual sales in the region of £22 billion. 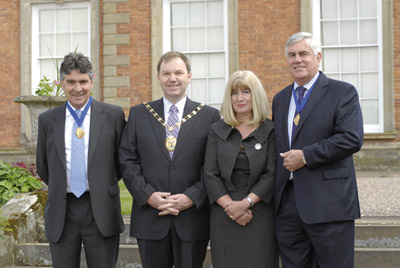 She was speaking to a packed audience of industry guests at the 122nd British Jewellery Giftware & Finishing Federation AGM at the spectacular 17th century ancestral house of the Earls of Bradford – Weston Park, Stafford.

She said: “There is no doubt that tougher economic times are a reality. Over the last couple of years the federation has ensured a financially sound platform and created an environment where we will be able to support the increasingly vital work of the trade associations.”

Evans also urged caution for the forthcoming year, whilst hinting at the positive steps being taken to ensure the growth and security of the Federation. She said: “The worldwide market place is volatile so all our energy must be focussed on retaining a stable financial situation. The BJGF realises that the macro economic climate is tough and that our members may experience hard times.

Strategically, the Federation is endeavouring to position itself to meet the challenges of the credit crunch. Other organisations of similar ilk will also be experiencing these conditions, it is therefore logical for the Federation to develop relationships with organisations that are aligned to the same industry sectors that we represent. Positive steps are being taken to progress this new avenue for the Federation, as it will secure a sound future for the organisation as well as strengthen it.”

Three of the largest Federated Associations (the GA, BJA, and SEA) provided a fascinating insight into the activity of the last twelve months. Chairman of the GA Mike Burgess said: “The GA has seen a dynamic twelve months with a major revamp of its website, the repositioning of Gift of the Year, substantial lobbying and a commitment to nurturing young, creative companies which it considers the lifeblood of the industry, through initiatives such as its exhibition New to Gifts.”

The BJA has seen a no less dynamic year. It reported a net growth in membership and spoke of its commitment to informing the public about the need to ensure that they buy from a trustworthy source.

It is doing this through its support of the Council for Responsible Jewellery Practices. It spoke of the need for constant innovation and the changing face of business models available to retailers. Chairman Barrie Dobson said: “With so many routes to retail markets, such as the internet and digital TV, our members need to embrace as many of these routes to market as possible.”

Meanwhile, Martin Olsen of the SEA argued that with a shrinking UK market, the future of its members increasingly lay in overseas markets.