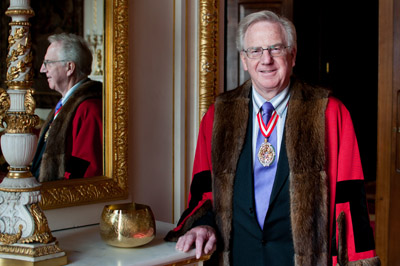 The Goldsmiths’ Company, one of the Twelve Great Livery Companies of the City of London, has a new Prime Warden, Lord Sutherland of Houndwood.

Lord Sutherland’s first official duty as new Prime Warden is the opening of the Goldsmiths’ Company’s spectacular exhibition “Gold: Power and Allure – 4500 years of gold treasures from across Britain” at Goldsmiths’ Hall on May 31. The exhibition is open to the public from June 1 to July 28 and is free of charge.

Lord Sutherland is one of the country’s preeminent philosophers of religion and has enjoyed a long and distinguished career in academia.

In recognition of his commitment to education he received a Knighthood in 1994 and was subsequently invested with the Order of the Thistle in 2003.

Stewart Sutherland (71) was born and grew up in Scotland. Educated first at Woodside Primary School in Aberdeen, where he was inspired by his teacher the redoubtable Miss MacDonald, he then went onto Robert Gordon’s College where he encountered yet another inspirational teacher, Ian Forrest who encouraged and fuelled his interest in philosophy.

Forrest orchestrated a meeting between the young Sutherland and an eminent Scottish philosopher, Donald MacKinnon, who held a Chair at Cambridge, and who subsequently became his mentor and a lifelong influence. Having graduated with a first class degree in Philosophy from Aberdeen University, Sutherland joined MacKinnon at Cambridge where he studied for an MA at Corpus Christi College.

A series of distinguished academic appointments followed including University College of North Wales, the University of Stirling (1968-77), the Chair of Philosophy of Religion at King’s College London (1977-85) after which he became the College’s Principal (1985-1990).

He then moved on to the Vice-Chancellorship of the University of London (1990-94) during which period he also found the time to be the Chief Inspector of Schools and set up Ofsted, a non-ministerial government department which was intentionally outside the control of the Secretary of State for Education. In Sutherland’s view, “it has stood the test of time”!

In 1994, the same year he was knighted, Sutherland was invited to become Principal and Vice-Chancellor of Edinburgh University – an offer he could not refuse! Then in 2001 he was elected as one of the first batch of “people’s peers” and he continues to be an active cross-bencher in the House of Lords.

Lord Sutherland’s last official academic appointment was as Provost of Gresham College (2002-2008), but outside of his academic life, he has also chaired numerous important government committees relating to education. Health issues also feature prominently on Lord Sutherland’s agenda, for example, he has been President of the Alzheimer Scotland since 2002 and a Patron of the Centre for Dementia at UCL since 2008.

Lord Sutherland joined the Goldsmiths’ Company in 1987, was elected to the Livery in 1991 and to the Court of Assistants in 2000 and has been a long serving member of the Company’s Education Committee.

Lord Sutherland said; “I am looking forward to my year as Prime Warden. We live in challenging times, which makes the Company’s educational and charitable initiatives even more pertinent. In addition, the Company’s commitment and responsibility towards its trade and industry remain at its core, as has been demonstrated by the considerable investment in the new Goldsmiths’ Centre, which was officially opened in April. While demanding, this is nonetheless an exciting time to be Prime Warden of such an august and proactive Company.”

The Company in turn is very fortunate to have Lord Sutherland at its helm and will benefit greatly from his considerable expertise and leadership skills.