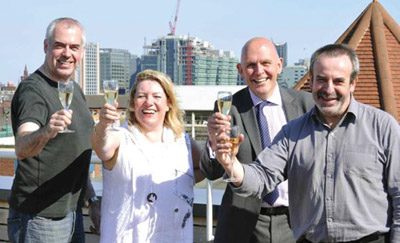 The Birmingham Jewellery Quarter’s business community gave a firm thumbs up to the proposals for its own Business Improvement District (BID) on 25th May after a large number of people voted in favour of the initiative.

A BID is defined as a precise geographical area within which businesses invest collectively in local improvements and additional services.

Over 600 local businesses were asked to vote to support the initiative, which will see companies with premises with a rateable value of £10,000 and above pay an annual levy of 2% to fund additional investment for the benefit of the whole area.

The BID received an encouraging 45% turnout of voters, with 80% of those businesses voting ‘yes’. It is estimated that the BID levy will bring in an estimated £2million over its five-year lifespan and could be expected to lever in a similar amount from other resources.

With the establishment of the BID, we will now be able to deliver a whole range of enhancements to the area that will improve the experience of those who work and visit here and also unlock the Jewellery Quarter’s ability to attract more investment, employment and visitors. The resounding result in favour also demonstrates that businesses understand the real difference that a BID can make to an area.”

The Jewellery Quarter BID, which officially begins life in October 2012, will now be governed by business levy payers and supported by a full time BID manager, who will be appointed shortly.

The BID will help to improve the Quarter in many ways, including providing a welcoming environment for visitors, clean and safer streets, improving marketing to increase footfall and inward investment, and improving connectivity to the city centre.