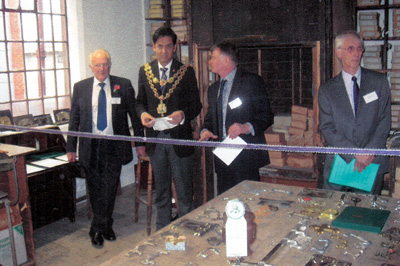 Perry Beeches II School Choir sang in the courtyard in the presence of the Lord Mayor of Birmingham Councillor Shafique Shah and an invited audience, to the launch of the Newman Brothers Coffin Works Museum in Fleet Street, following a 15 year project by the Heritage Lottery Fund, Birmingham Conservation Trust, and Birmingham City Council.

The Lord Mayor opened the first of three events to be held during the day, in the Shroud Room, welcomed all present and congratulated those who brought the project to fruition.

They spoke about the development to provide workshops, lecture rooms, and the income streams of visitors, tourism, events, and the four workshops, two of which have already been occupied. 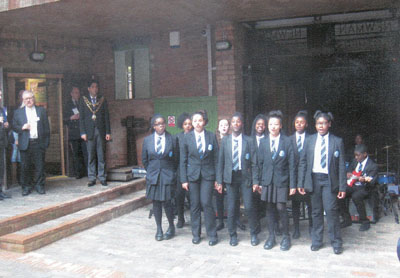 Mr Andy Garbi, the Artist and composer talked about the technology of capturing the sound made by buildings, and the acoustics of the four rooms in the coffin works.

Guests were then invited to move downstairs to the courtyard and into the Plating Shop and Green Room for a Buffet lunch and drinks.
The event closed at 2.00 o’clock