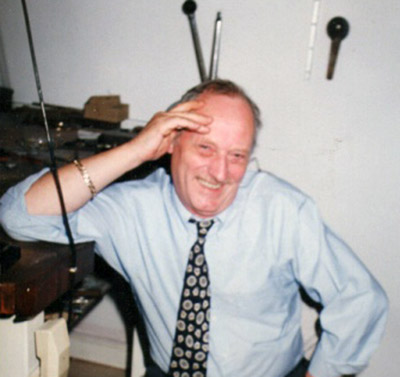 It is with sadness that I have to inform you that Colin Bonser passed away 27th June 2014 aged 70.

Colin started work as an apprentice mounter in 1959 at Hathaway and Muddiman in Great Hampton Street, he left there to join Stirlings Jewellers in the late sixties, owned by Johnny Parker and Peter Reckless.

I joined him at Stirlings in 1971 before leaving in 1973 to form Hands and Williams, with my business partner Roy Hands. Not long after Colin joined us as a mounter but very soon became a full blown partner.

He stayed with Hands and Williams until 2003, when due to ill health he was forced to retire from the business. He battled back and went to work for Salloway’s of Lichfield, which I know he really enjoyed.

Unfortunately his illness reared its ugly head and ended sadly on 27th June 2014.

Those who knew him will remember him as a master craftsman and a kind and loving human being.

Previous: Sara Preisler Gallery Presents: ‘If You Go Down to the Woods Today’
Next: Ciderfest – the Core of Summer Drinking