Home » Food and Drinks » Ciderfest – the Core of Summer Drinking 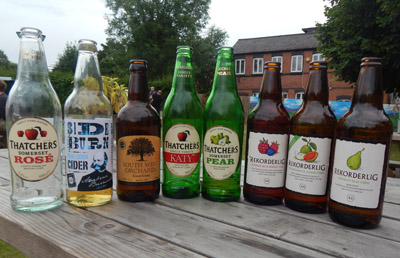 After previous successful summer festivals, Bitters ‘n Twisted Venues are on a mission to unite even more cider drinkers as its fourth annual Ciderfest begins at four of their venues.

The Victoria on John Bright St, The Jekyll & Hyde based on Steelhouse Lane, both located in the city centre, have been joined by Jewellery Quarter based The Rose Villa Tavern and Harborne’s New Inn for a month long celebration of all things cider and its pear counterpart, perry.

Ciders on offer range from traditional apple based scrumpys to light pear based fruity drinks, served straight up or over ice creating the perfect drink for when the sun comes out.

Favourites so far include Thatcher’s Rose, lightly sparking and made with the rosiest apples in the orchard, Weston’s Old Rosie – a traditional scrumpy style cider not for the faint hearted at 7.2% abv and for the more fun and fruity side of cider drinking Swedish brand Rekorderlig have a new offering for the summer – apple and guava cider to add to their growing range of refreshing drinks.

New to the shelves of the Bitters ‘n Twisted Venues is the toffee apple flavoured Cotswold Cider Co who offer Sideburn – named after how a cider drinker should apparently look!

Ciderfest kicked off at the start of July and will carry on until the 31st at the Victoria, The Jekyll & Hyde, The Rose Villa Tavern and The New Inn.