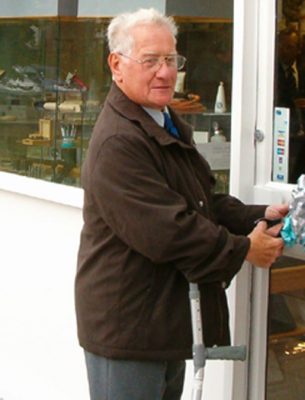 It is with great sadness we report the death of Dennis Edwards. Dennis was well known around The Quarter as a jewellery equipment service engineer. He died peacefully at home in his sleep on Tuesday 3rd August 2010 aged 77 years.

Dennis brought new life to all types of jewellery production – equipment repairing and servicing machines for mounters, setters and polishers – nothing was too much trouble for Dennis and he always managed to locate that all important spare part to get a machine back into production.

Born in Birmingham on Friday 17 February 1933, Dennis did his National Service in the RAF and this provided him with a background in both mechanical and electrical engineering, which he put to good use when carrying out his repair service.

Horology was one of Dennis’ passions and he provided an installation and repair service for clocking-in clocks for factories throughout the West Midlands. Dennis often shortened to ‘Den’ by people he knew, always had a smile on his face and was prepared to offer helpful advice to his many friends and colleagues in the Jewellery Trade.

He was a very friendly and unassuming man and carried on working into his early seventies, retiring after a hip operation in 2007.

A memorial service was held on Tuesday 10th August 2010 at Perry Barr Crematorium which was very well attended by family, friends, and members of the trade. After the service a celebration of Dennis’ life was held at The Towers on Walsall Road.

Dennis was a caring family man and leaves a widow Dorothy, son Andrew and daughter Ruth.

The trade will truly miss Dennis, a true gentleman.