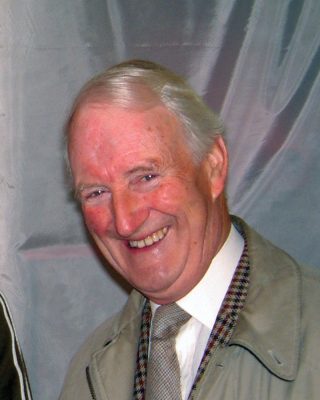 In November 2020, after spending the previous ten months in a nursing home, Ross sadly passed away from Dementia.

He was cremated on 3rd December at Lodge Hill Crematorium after a Ceremony at St Augustine’s Church, Lyttleton Road, Edgbaston.

Ross was an exceptional gentleman, much respected and loved by all who had the good fortune to have him as a friend and colleague.

Besides his many interests he strongly believed that conservation was an important issue – he was on the Conservation Advisory Committee to the BCC where he represented Birmingham Civic Society.

When he retired from industry, Ross became an active member of Birmingham Civic Society, a member of the Conservation Advisory Committee, also Chairman and Director of the Jewellery Quarter Association for many years, and always took part in organising all Festivals, exhibitions, breakfasts, and seminars, plus on occasions a contributor and photographer for The Ho—ckley Flyer.

Many messages have been received at The Hockley flyer. Here are many of the main ones:

How sad. What a gent Ross was! He will be greatly missed at the St Paul’s Club too.
Fr. Tom Pyke, Vicar of the Isle of Dogs – former Vicar of St Paul’s in the JQ

Ross was clearly someone of huge integrity who was greatly respected and loved.
The Revd. David Tomlinson – Vicar of St Paul’s in the JQ

Thank you for passing on this sad news. I did have the pleasure of meeting him during the clock unveiling at the office.
Doug Henry CEO and Assay Master – Birmingham

I knew Ross from the Priory Lawn Tennis Club and David his son with his van ‘David Bellamy – Gardens etc.’ Sorry to hear the news. He will be missed greatly.
Tom Fattorini – Thomas Fattorini Ltd

He was a lovely man with a cheeky grin that affected all who met him into a better mood. He was passionate about conservation, and the jewellery quarter in particular. Those that served with him on various committees in Birmingham valued his contributions which were frequently of great effect on the planning and development decisions we were taking. The city is definitely a poorer place for his loss, but a better place for his energy, direction, and the results he thereby achieved.
Peter Douglas Osborn

Thank you for letting me know about Ross. I am sorry to learn that he has passed away. I joined the Assay Office after he had stepped down as a Warden so never really got to work with him. Nevertheless, I had a lot of contact because he stayed on as a Guardian and of course through the JQA. Always a gentleman.
Michael Allchin former CEO and Assay Master – Birmingham

‘I knew Ross for many years through my work as Operations Director for the Jewellery Quarter Regeneration Partnership. Ross was heavily involved in the business community and whilst passionate about the Quarter could always be relied upon to give a measured view and bring calm to proceedings however heated they became.
If there was such a thing as Jewellery Quarter royalty, then Ross would be a member as the Quarter and its heritage ran through his veins. RIP Ross, it was a pleasure to have known you.’
Andy Munro

Thanks for this & for letting me know about Ross. Sad news, but happy memories of CHP; all seems an exceedingly long time ago now, though the work continues….
Tim Bridges – The Victorian Society

His wish was that there should be ‘No Flowers’ but people were invited to make a donation to the following:
Army Benevolent Fund, Attn Thomas Furber, 122 Station Road, Harborne. B17 9LS.