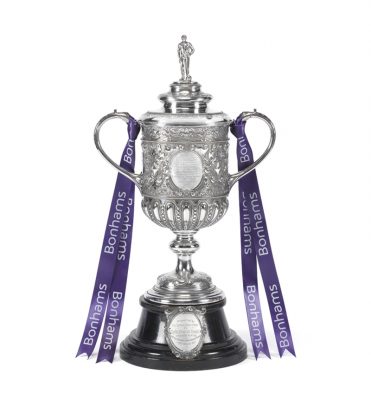 The silver trophy formed as a two-handled cup and cover, surmounted by a figure of a footballer with a football at his feet, the body with four oval cartouches engraved with the winning teams from 1872 to 1910 (1872 to 1895 being the winners of the first F. A. Cup – now lost – see footnote below), the loaded base underside inscribed ‘Made By P.Vaughton & Sons Birmingham 1896.

From A Cast Of The Old Cup Which Was Lost’, with ebonised plinth bearing two later silver plaques, both with maker’s mark for Charles Edwards, London, 1910, the first inscribed ‘Presented by The Football Association To The Right Hon. Lord Kinnaird in appreciation of long and very valuable services rendered to the game 6th February 1911’, the second inscribed ‘The Right Hon Lord Kinnaird International 1873. Final Cup competition 1873.7.8.9 & 1882. Member of Council since 1868.President of The Football Association since 1890’

Private UK Collection: Exhibited: The National Football Museum, Preston and now Manchester from 2005 until June 2020.
The first FA Cup used between 1872 and 1895 was stolen from the Birmingham football outfitter William Shillcock’s window on 11th September 1895 when it was on display after Aston Villa had won it that year. A £10 reward was offered for the recovery of the cup but sadly the trophy was never seen again. In 1958 an 80-year old Harry Burge came forward and said he had stolen it to make counterfeit half-crown coins and in 1975 Joseph Piecewright was implicated in the original theft but neither of these claims have been substantiated. As current holders of the trophy and therefore custodians of it – Aston Villa FC were fined £25 for the loss of the trophy.

In 1953, 90 years after the formation of The Football Association, Geoffrey Green wrote his seminal work ‘The History of The Football Association’ and page 173 notes that “……and at a Council meeting on January 22nd, 1896, it was proposed by A Sharman that the new Cup to be purchased for competition in place of the old one lost, should be of gold, the cost not to exceed £200.

he proposal was lost, and a resolution put forward by R P Gregson, seconded by Dr Morley ‘that a cup as nearly as possible like the old cup should be purchased’ was carried. Thus, another trophy, costing £25 and of twin design to the original, was set upon its high pedestal”.

Fortunately, a cast of ‘the old cup’ existed, and Vaughton & Sons of Birmingham were commissioned to produce an exact replica of it at the cost of £25. This is the cup offered for sale. It bears the winners’ names from 1872 onwards including ‘Wanderers’ who won five of the first seven finals including three in a row (they were then presented with the trophy in perpetuity only to apply the true ‘Corinthian’ spirit of the amateur game at the time and return it to The Football Association – ironically, they never won it again!), Oxford University, Royal Engineers, Old Etonians, Clapham Rovers (who were strong in both codes of football – association football and rugby union) and Old Carthusians. In 1883 Blackburn Olympic won the ‘the little tin idol’ and the game of Association Football changed forever. The domination of the former pupil’s public-school teams had come to an end and the North of England and Midlands teams began a new era in the game.

The present cup offered for sale was contested for on 15 occasions before being retired and subsequently presented to The Right Hon Lord Kinnaird in 1911. First time winners of this actual trophy include Manchester City, Manchester United, Everton, Newcastle, and Tottenham Hotspur to name but a few. Below are listed the details of each final this cup was played for with all the matches taking place at the Crystal Palace with the exception of the replays of 1901 (Burnden Park, Bolton) and 1910 (Goodison Park, Liverpool)

The Right Hon. Lord Kinnaird:
Arthur Fitzgerald Kinnaird, later 11th Lord Kinnaird was born on 16th February 1847 in Kensington, London. He was educated at Cheam school, Eton and Trinity College, Cambridge where he became an all-round sportsman and represented Cambridge at numerous sports, including association football.

He played and scored a goal in the second-ever FA Cup Final in 1873 when Wanderers defeated Oxford University 2-0 and went on to play in a further eight finals for either Wanderers or Old Etonians and ended up on the winning side on five occasions in total between 1873 and 1883. Although born in England, the family seat was at Rossie Priory, Perthshire and he made a solitary appearance for Scotland against England in 1873 when England won 4-2.

He was football’s first superstar, the equivalent of Cricket’s W G Grace, and was described as ‘without exception the best player of the day’. He played in several positions including goalkeeper, half-back and forward and was an imposing figure on the field of play in his long white trousers and distinctive red beard. A hugely popular figure he celebrated by doing a handstand in front of the pavilion to a standing ovation after he captained Old Etonians to a win over Blackburn Rovers in the 1882 cup final.

A key figure within The Football Association he mixed administration duties with the love of actually playing the game and helped bridge the gap between the former public-school players who oversaw the running of the Association in its formative years and the emerging talents of clubs like Blackburn Rovers who were from the ‘working class’ north.

He was a Council Member of the F.A. and became a Committee member in 1868 and Treasurer in 1877. In 1890 he became President of The Football Association succeeding his great friend Sir Francis ‘The Major’ Marindin, a role he remained in until 1923, the year of his passing and the year Wembley Stadium officially opened.

The History of The Football Association published to celebrate the 90th Anniversary of The F. A. in 1953 records the background to Kinnaird being presented with the cup being offered for sale:

“The original trophy ‘the little tin idol’ – it may be remembered, had been stolen in Birmingham in 1895. It had been replaced by an exact replica, which after a spell of faithful duty had been presented by the Council to Lord Kinnaird in 1910 (the trophy was actually presented on 6th February 1911 as recorded on one of the plaques on the base of the cup) on completion of his 21st year as President of The Association.

This was a splendid gesture on the part of the council members for Kinnaird’s services to the game was unmatched, but there was also an underlying reason why the life of the second FA Cup was brought to an end. It had been discovered that the design, without the authority of The Football Association had two seasons earlier been pirated in Manchester.

The association naturally disapproved strongly at the time, but no steps could be taken in the matter since the design of the cup was then not copyright. The Association’s answer was to pass the following resolution at Overstrand on July 9th 1910: “That the present Football Association Challenge Cup, having been duplicated without the consent of the Association, be withdrawn from competition and a new cup offered, the design of which should be registered.”

During a recent clean of the trophy, by Bonhams Head of Silver Department Ellis Finch, the figure of the footballer was carefully removed revealing hitherto unknown graffiti in the form of various initials (presumably of former players/club officials of winning teams of the trophy and other scribbles), the most decipherable being ‘J P Watt Newcastle 1910’. From research there was no J P Watt who played for Newcastle United, but Frank Watt is listed as their first unofficial manager and oversaw the winning of the cup this season.