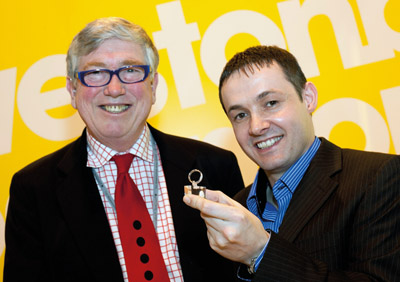 Patrick Fuller (left) Chairman of the Birmingham rapid-prototyping and casting company, Weston Beamor is pictured with Owen Condon, a student in Jewellery and Silversmithing at Birmingham City University (BCU).

The picture was taken at The Jewellery Show at Spring Fair Birmingham where Owen was presented with a prize of £500 and a week of work experience, at Weston Beamor, having won the company’s annual competition for 2nd year students studying on the School of Jewellery’s HND Course.

Entrants were asked to create a range of jewellery for men using Gemvision’s Matrix CAD software.

Owen’s winning designs, which were based on car tyre tracks, demonstrated not only a particularly clever use of CAD – in that he created cutting tools to make track patterns on the rings – but also demonstrated awareness of the current market by producing a design which cuts down on the overall metal required to make the product.

Speaking about his success, Owen who joined a jewellery workshop straight from school at 16 and spent three years working on the bench in his native Ireland, before joining the HND Course, said: “It is amazing to get this chance. The work experience will be invaluable to me. I’ve always had aspirations to design and hope I can go on to develop this idea into a viable collection.”

Natalie Baxter and Cherry Wu were voted runners up in the competition.